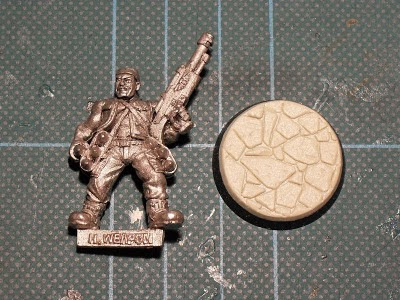 I've started work on Harker's Squad and one of problems I have is that because they're all metal and I use bases with a solid plasticard top, I have to pin them all. Now, this is normally a long winded process requiring drilling holes in everything and glueing bits of wire here and there whilst avoiding stabbing yourself with your drill bit because you're pressing so hard trying to drill into the sole of the foot.

To be honest, it's all a bit of a hassle, so I'll show you an easier way of pinning metal models to solid bases that I picked up on my travels through webland. You'll need ...
So basically, all your normal hobby stuff. The important thing is to use a drill bit that's as thick as the metal basing tab but not thicker, the large GW one works fine. First off, using your clippers, remove the central portion of the basing tab leaving two prongs under the feet. 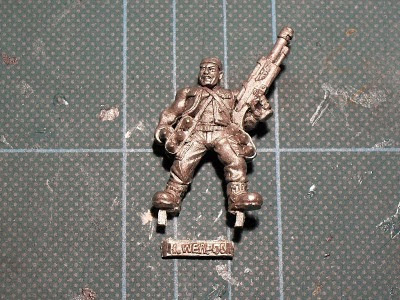 Then, using your flat file, round of the prongs so that they're the same thickness as your drill bit. It's best to have the bit handy so you can compare it against the prongs as you file. 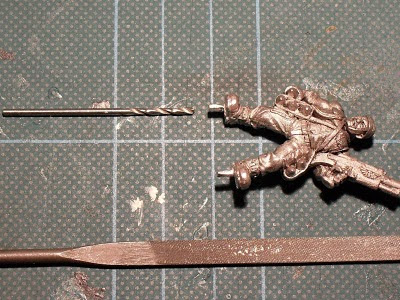 Next up, size up the position of the model on the base and then mark it with you pen or paint. 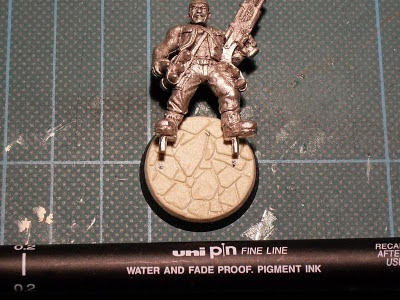 Then simply drill the holes out making sure that after you've drilled the first, you double check the position of the second hole using the model. 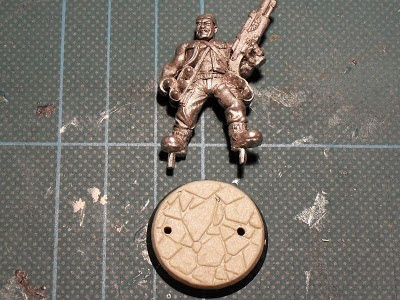 Once you've got your holes done, put a bit of superglue on the prongs and mount the model on the base. 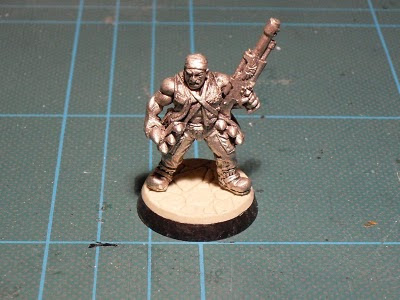 And there you have it, a simple way of pinning metal models to solid bases without using bits of wire, with a minimum of drilling, and the whole process takes about two minutes from first clip to glueing. Hope you found it useful guys.
Posted by Col. Corbane at 09:05

Holy cow - How could that never have occurred to me?! 20+ years in the hobby and there's still simple but amazing modeling tricks to learn. I can't tell you how many times I've stabbed myself with my bit while drilling out the bottom of boots... Great tip, Colonel!

Simple and easy! I'm even lazier...I just clip down the tab and drill out a hole large enough to take the rectangular peg! But I don't use textured bases...so your method makes all the difference in preserving the detail!

I wonder how many OTHER people are slapping their foreheads in stunned disbelief at their own hobby-blindness right now?

I think I'm going to get a bruise... Great tip.

Why is it the simple stuff seems so brilliant?

I'm there with Joe Gekko, facepalming like a champ.

This is a fantastic little tip, and will make mounting my metal minis on resin bases so much easier!

Excellent move! I do something similar with my Grey Knights when I base them to my DragonForge bases. That extra metal comes in handy after all! ;)

nice one on using the tab to make the pins.

Making one pin longer than the other aids with getting the second hole correct as you can check the second while the first is part mounted.

I am glad that I am not the only one on this ball of dirt that does that! Often it is the simple solutions that work the best.

I was just re-pinning models form slotted based to scenic bases and doing it the hard way.

Amazingly simple; I love it!

Everyone else has already said it, but that's awesome!

WOW! Why hadn't I thought of that. Great tip, thanks!

TY. Textured plasticard bases all round then.

and that's why you kick @ss

I'd love to say that the idea was mine guys or at least remember where on the web I saw it so I could give them proper credit but I had to share it as it's saved me loads of time.

@Mordian7th - there's always something new to learn, it's saved me quite a few pin vice wounds.

@Joe Gekko - That's how I felt when I first saw it mate.

@the other Kevin - The simple stuff always is mate.

@Vredesbyrd - It's sped up my mounting no end mate.

@CylonDave - I'm surprise at how many people do this and yet I've hardly seen it in action. Who would have thought you could use those tabs for mounting models - lol

@Gotthammer - Nice tip mate, I'll be using that - thanks!

@Jason - I wish I'd found it years ago mate, so there's one more on this ball of dirt in the lcub - lol

@Rob - I really wish I could remember where I first saw it so I could give them proper credit as they deserve it for this piece of genius.

@link6413 - Something that cool had to be shared mate.

@Zzzz - textured plasticard bases for the win mate, now all I need is to figure out a simple way of doing the bases and I'm laughing.

@Jabberjabber - Thanks mate, wish I'd come up with it, it'd be my claim to fame - lol

Nice idea, something I'll keep in mind in the future!

Love this tip, simple, practical, cheap and developed through the experiences of a taleted modeller, good call.

I did exactly that with my Dante Model and found the pieces to be too weak. He ended up breaking off and I had to pin him the old fashion way (with wire rod).
That stuff under the feet is meant to be clipped off easily, it will hold for easy 'flat footed' models like in this tutorial, but anything requiring a little more muscle won't work - imo.