Blast from the past

Not much to show in the way of updates to my guard, but I was moving some stuff around earlier and found some old models. You'll have to forgive the painting, they've been painted numerous times by various children. 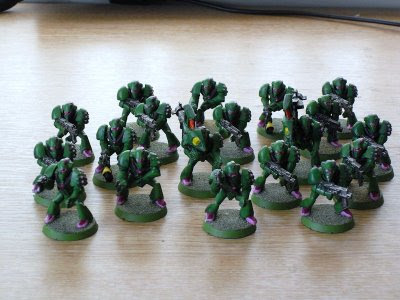 I can actually remember putting these together. Now for some metal models ..... 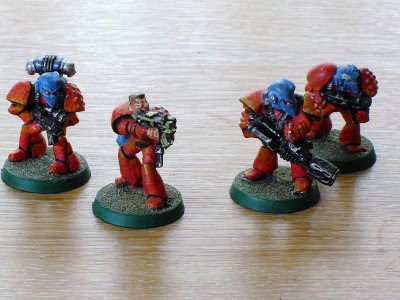 And finally, does anyone recognise this beauty? 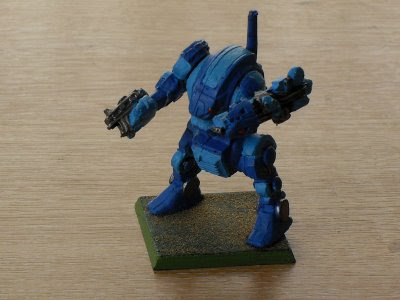 Well, back to the painting, laters folks.
Posted by Col. Corbane at 08:05 6 comments:

It's been a busy couple of weeks and hobby time has been rare to find but I thought I'd do a little update on the bits and bobs I have managed to do, which in all honesty isn't much. I've put together a few extra models for 2nd platoons command squad. The signalman and standard bearer are from the new command sprue which has lots of juicy bits. The medic is a old metal one, I want to save the medic bits for a future project. 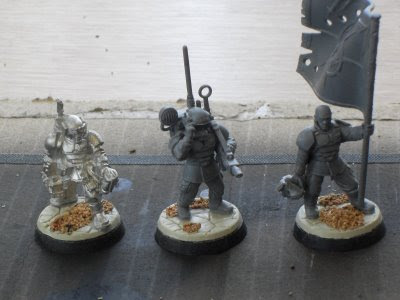 I've also been working on my hellhammer. I've only added some decals, the tracks, a vehicle identifier and cleaned up some of the overbrushing. Not much but every brush stroke gets me closer to the finished tank. 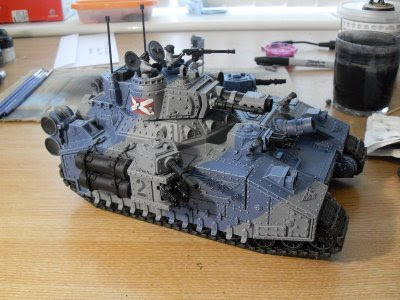 Although the hobby time has been short, I have been able to quite a bit of reading time in and I've just finished the third Gaunts Ghosts story, Necropolis based in a hive. It's cracking cityfight story and it's got me inspired to play some cityfight, the Corbanian 1st are a cityfight force after all. Time to dig out the cityfight stuff.
Posted by Col. Corbane at 07:42 5 comments:

What's this? Has Col. Corbane wandered from the guard path? Nah, I love my guys, but they weren't the first army I had.

Whilst cleaning off a shelf in my display cabinet, I decided I'd take the opportunity to get some pics of my Grey Knights. It's a force I picked up a few years ago, I've never really played with them much as I just find them to difficult to play in 5th edition. 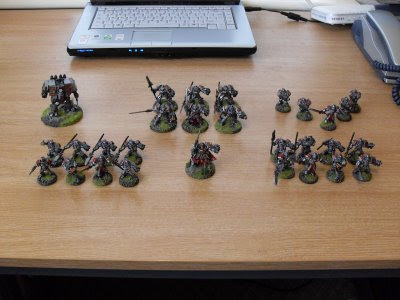 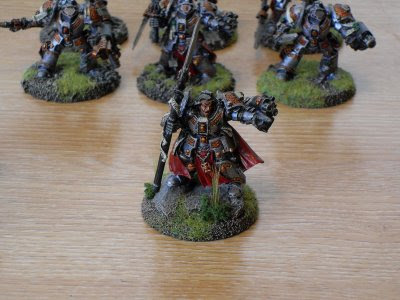 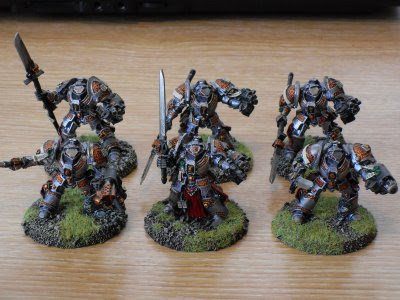 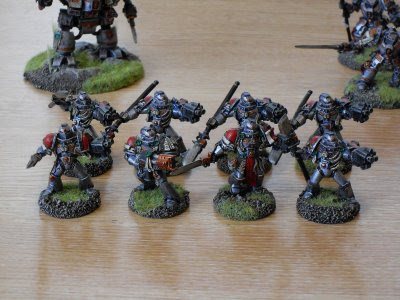 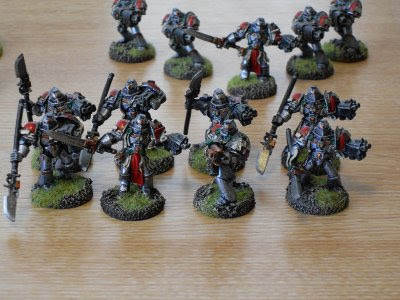 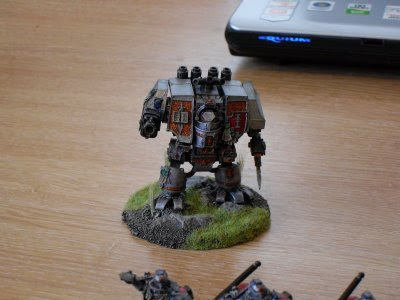 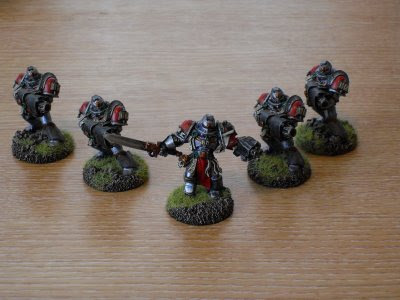 I've got a few more unpainted models in a box and at some point, I'd like to give them a Land Raider with the FW upgrades. I'll probably wait until they get a new codex, so it won't be any time soon.
Posted by Col. Corbane at 04:42 2 comments:

I've been avoiding the Valkyrie and Hellhammer quite well this past week. Instead of tackling these mammoth projects, I've been working well within my comfort zone by knocking out a commissar and another two squads for 2nd platoon. 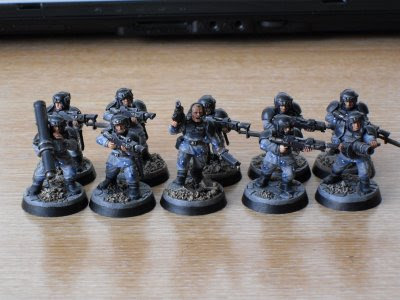 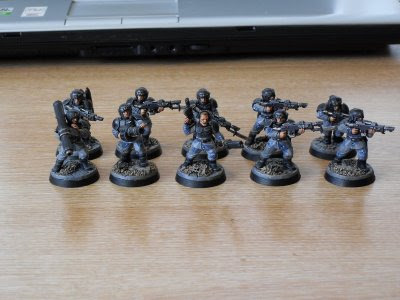 That leaves me with one more troop squad, two heavy weapon squads and a few odd models for the command squad. I'm also going to have to do quite a few vox casters to take the best advantage of the new orders system. On the painting point, with these guys and the commissar done since the last update, that's 21 points from the infantry total, finally taking me back into the black and slowly towards my goal.

I'm going to leave 2nd platoon for a while now and get stuck into a few of my other projects, including the trenches now my nearest and dearest has let me back on her newly repair editing suite.
Posted by Col. Corbane at 07:15 6 comments:

Competitive vs Casual play - my thoughts

From the outsets, I want to make it clear that it is in no way my intention to offend anyone with this blog, but rather highlight the differences between the UK and other countries. Most of what I'm saying is based casual observation, so if you think I've got anything wrong, then please comment.

So, where's this one come from? Well, I've been listening to 40k Radio and Dice Like Thunder, and they've raised the issue a few times, Jervis Johnson wrote about it a little while ago and today, Siam Hamm Fritz made a comment about a tournament he recently attended, which got me thinking.

On one of the podcasts, someone said that someone who plays casually doesn't care if they win or lose and he's probably right. The thing is, in the majority, us Brits see the game completely different to the rest of the world. But before I go into why, I want to give you some examples.

The tournament scene in the UK is virtually nonexistant, yes they do happen but nowhere as fequently as in the US, Austrailia or the rest of Europe, but the hobby scene is HUGE. GW makes about four times more in the UK than they do in the US and then the same again from the rest of Europe. It's rare to find a newsagents that doesn't stock White Dwarf, even in my tiny little village, our corner shop stocks it. When it comes to GW stores, there's 6 within an hour of me (Shrewsbury, Chester, Liverpool, Manchester, Stoke & Birmingham) and numerous hobby stores and gaming clubs.

So, if there's so bloody many of us, where are we? why arn't there hundreds of blogs and forum posts from Brits? Well, the key point in the phrase is casual! Out of the 40 or so gaming friends I have between clubs and mates, I'm the only one who blogs or checks out forums regularly. There's another guy who occasionally goes online but other than that, the rest are just happy to play some games, have a laugh and enjoy the hobby. So, as Brits, we don't really have a strong presence online, but that doesn't mean we're not playing games and getting pissed. When it comes to tournaments, there's only one guy out of the 40 that has any real interest that way. My local club only has one tournament a year for the three main systems played yet they have a campaign that's been running for the past ten years.

Now considering the amount of players, it may seem strange to have such a poor tournament scene and so many casual players. Well, reason is something uniquely British and harks back to the Tom Brown school days. The principle of athleticism, or playing in the spirit of the game. This is where the phrases "let the best man win" and "it's not winning, it's the taking part that counts" have come from. This principle is deeply instilled within all British people, it's still the basis of the physical education our kids do at school. A Brit will have more respect for someone who tries and fails than someone who has a good chance of succeeding and does.

A perfect example of athleticism and how it's rooted within the British mindset is Eddy the Eagle Edwards. For those of you who don't know who Eddy is, ask any mature Brit and they'll tell you he was a star or as my mate put it, a great man. A few winter olympics agos, Britain decided not to entry a ski jumping team in the olympics. Since no one was going, Eddy put himself forward with no experience of ski jumping whatsoever, he hadn't even skied on real snow before the olympics. He didn't have a chance in hell of winning, the general consensus was that he'd probably kill himself on the first jump but everyone in the country was behind him, because he gave it a go - athleticism.

So, going back to the idea that casual gamers don't care whether they win or lose. Well, Brits in general don't, we don't look at the game as a way of beating someone or grinding them into the ground. For us, the key word is "play" when it comes to playing a game. We don't consider a game bad because we lose, we consider it bad if we don't have a laugh. As my mate put it, if you don't have a laugh, what's the point in playing.

Well I hope this gives you an insight into why us Brits are so casual about the hobby. Hope I haven't offended anyone but if I have, sorry. Please feel free to comment, I'd love to hear your thoughts.
Posted by Col. Corbane at 10:48 6 comments: 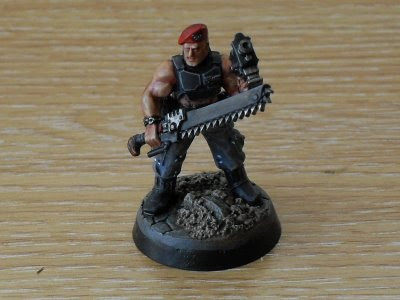 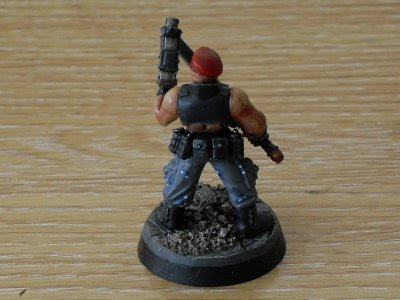 I've still got the two additional squads to complete for 2nd platoon. Hopefully, they'll be done by the end of the week.
Posted by Col. Corbane at 06:16 9 comments: