The Imperium of Mankind faces a new threat, it encroaches it's borders destroying everything in its path. This new threat does not fit with any previous race encountered ....... they are THE BLOBS! 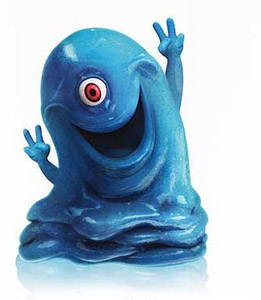 I woke this morning after having a strange dream with an idea for a new 40k race. A gelatinous race of unstoppable blobs rampaging through the Imperium. At first, I dismissed the idea, but slowly through the day, the old cogs turned and I think I can pull it off.

I've been looking through the Necron codex, and I think it'll work as a basis for the blobs. First off, the units are very standard, ie, they're either warriors or destroyers, etc. There's no individualisation within the units, there's no heavy weapons guy or squad leaders. This will make it easier to just build various different squads of blobs without having to worry about identifying specific models within the squad. A lot of the characteristics of the army fit well with the idea of the blobs, even the we'll be back rules with the blobs reforming from splats.

I've been doing a bit of thinking with regards to how I model them, and I've got a load of polystyrene eggs that I can use for the basic shape of the models and then build up the folds and tentacles using green stuff. The main characteristic will be a blob like body with a 'arm' extending from the top with an eyeball on the end of it. I'm also thinking of adding some kind of mouth of sorts although I'm not sure about arms?

So far, I've got the following units in mind.

Email ThisBlogThis!Share to TwitterShare to FacebookShare to Pinterest
Labels: blobs

It's been a long journey and I've learned a hell of a lot about sculpting along the way but now it's time to put the sculpting tools down and get painting!

Here's the final pics of Harkers squad in all their green glory ... 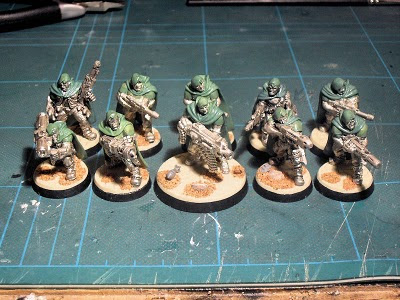 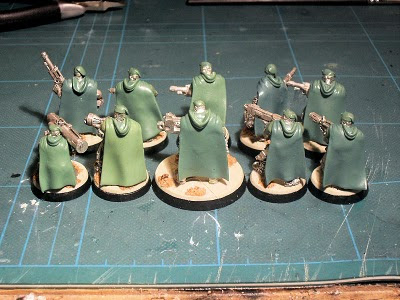 The hoods came out quite nice and I've found a relatively simple way of doing them although I need to work on getting them to look more natural and blend into the folds of the cloaks better in the future.

Now it's time to crack open the paints and get these guys camo'd up!
Posted by Col. Corbane at 14:41 7 comments:

I need a little help guys

As most of you know, I have a little side project blog on campaigns called Going on Campaign. As part of the project, I'm converting completed sections into pdfs. I've got the text sorted, but I need some help with padding it out with images, so I'm asking if a bit of help from the blogosphere.

My picture wishlist includes ....
Feel free to email anything to me at colcorbane@googlemail.com

Thanks in advance guys!
Posted by Col. Corbane at 13:32 No comments: