Hindsight is a wonderful thing, announcing the end of this blog may have been a bit premature. You see, after telling my lovely wife that I wasn't really into 40k anymore, so I'd stopped this blog, she promptly called me quite a offensive word and pointed out that I'd put a lot of effort into it and I should just carry on blogging, but just blog about whatever I do get into.

It sounds so simple when it comes from someone else. So gents, you could say I'm back but with a smallish addition. I'm going to be changing the focus of what I write about from 40k to my adventures in gaming with my little lad.

It's actually quite adept, you see, this blog was named after my little lad Corben, so he's the Corbania bit and I suppose I've become the Prime, not so much Optimus Prime, more like past my prime!

Anyway, so what exactly does this mean. Well, first and foremost, it means that this blog isn't going to be focused mainly on 40k anymore, I'm not sure what it's going to be focused on, that depends on what me and little man decide to get into. I do intend to keep running the parade ground list as it's something that a lot of people like. I'm also pretty sure that there's still going to be some guard involved, but right now I'm seeing Heroquest and maybe some scenery building in the way of a custom built dungeon.

In the meantime, I'm going to leave you with a picture of me and little man enjoying his very first game of Heroquest, well highly modified Heroquest and for the record, he kicked butt, killed the chaos knight and got away with the treasure! 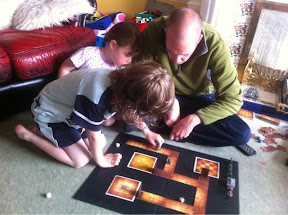 Corbania Prime - A blog about a dad and a lad and their adventures in wargaming!

Very good to see you posting again mate even if it's not about 40K. A supportive wife is truly a blessing to have, I know that. Hope your son is enjoyng his early steps into gaming and I am looking forward to see how this goes.

Fantastic to see you're back Col.
My blog evolved when I lost interest in 40k, as yours has. I find it a great outlet, motivation and inspiration. I think you just have to mould it to whatever your needs are.

Welcome back, glad your better half made you see the light.

However if you are looking for ideas check out http://miksminis.blogspot.com/. Mik does a good job writing about all sorts of different things and some of my favorite posts of his are not at all gaming related but are instead about Legos, stories he writes to his daughter and put in her lunch, or his garden.

I read and comment on your blog because your write it. Your tone, your honesty, and you general joy of gaming and the fact that you share it with us is why I read this blog.

I'm looking forward to reading about the other things you decide to share with us and giving advice and sharing my experience when I think it could help or give perspective to what you are writing about. Keep sharing, we will keep reading. Doesn't matter the topic.

Kool. I'd love to see the 1st in action again at some point.