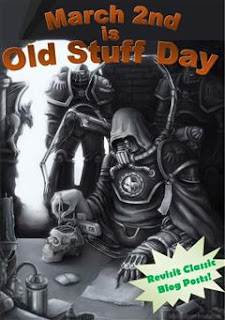 With it being 'Old Stuff' day today (Thanks to Rob over at W39,999), I thought I’d dust of my laptop and dig out some of my favourite blog posts from the past. This turned out to be more challenging than I originally thought it would. There’s just so many posts that I love, so many models and conversions that I want to dig out from the archives. So, instead, I’ve decided to highlight the posts which seem to have attracted the most attention in the past, my tutorials.

Firstly, I think that they’re good posts, secondly the blogosphere seem to like them based on the comments they’ve received. More importantly, I think rather than showing off my models, I’d like to use today to highlight these tutorials to all the new visitors to my blog who’ve probably never seen them. So here you go guys, my blast from the past ....

Newbies guide to blogging - Way back at the start of last year, I thought it would be a good idea to put together a post about what I thought you needed to do to be a successful blogger. Based on the comments, it looks like it hit the spot.


Getting your blog listed - One of the biggest struggles for newbie bloggers is making sure that their blogs appeared on the top of the various blog rolls out there when they posted them rather than appearing halfway down the list and getting missed. Luckily, I have a friend who works for Google who gave me some invaluable advice, it’s a must read for newbie bloggers.

Making heavy foliage - This one’s a relatively simple tutorial on how to make various types of foliage, from woodlands and jungles to exotic alien worlds. There’s also a bit on making area terrain bases to make playing your games more easier.

Plasticard bases - This one has to be the simplest tutorial on the web, I just did it to give people who kept asking me about my citiyfight bases a page to look at rather than retyping them method over and over again. Ironically, this is the most visited page on my blog, I think I’m missing a trick here - lol

Green stuff guides - Not so much a tutorial, but more of a guide to all the different greens stuff tutorials I’ve found on the web whilst getting into sculpting.

Sculpting cloaks & capes - Although it’s not really an oldie, I still think it deserves a mention because it’s my first and only green stuff tutorial and to be honest, trying to find green stuff cloak tutorials that aren’t just sticking a blob of green stuff on that back of your models is pretty hard, so I thought it’d be a good idea to share it.

Well, that’s it for the tutorials and ‘Old Stuff’ day, hope you found something of interest guys, I’ll get back to rehydrating my paints!
Posted by Col. Corbane at 11:06

Email ThisBlogThis!Share to TwitterShare to FacebookShare to Pinterest
Labels: Tutorial

I sculpted cloaks on my scouts back in 2009, they looked ok to me but not great. I've recently been following your tutorial, and while I only got one model done before I kinda lost the GS bug I have received positive comments on it, definitely worth putting up today.

That 'newbie's guide to blogging' is the one that gave me the impetus to get my blog going!

If my head hadn't been so preoccupied with work, I'd have done something similar.

Mind you, it probably would just have involved a corgi...

PS: I was wondering the other day: was it you who caught my attention with the start of a 'how to' on trenchworks?

One of my favorite old posts of yours was about quitting smoking and the incentive plan you came up with to help. February would have been one year, and the Titan from Forge World. I'm hoping no word on the Titan doesn't mean it didn't work.

Oddly enough, I think I've read all of these already, but they are great posts. The contributions for new bloggers are must-reads in my opinion, and I'm glad you chose to link those.