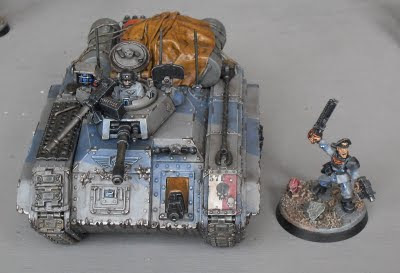 At the moment, my company command squad is looking a little bare. There's only the commander and his chimera. I'm planning to pad it out with veterans, specialists and advisers. 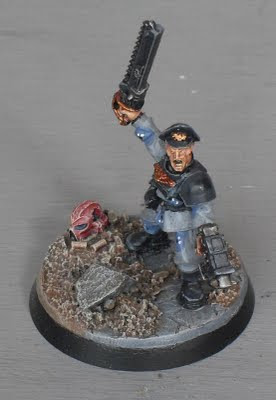 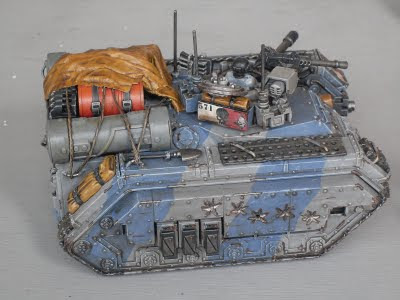 Long term, I've got quite big plans for the company. I'm planning to build it up to a full infantry company with four platoons. The first will be a veteran platoon made up of 5 veteran squads and a command squad. The second and third will be standard infantry platoons, the 2nd platoon are almost finished already. The fourth final platoon will be a support platoon made up of heavy weapons.

It may seem strange to have such grand plans, but I'm looking at how the army will grow over the next 6 years or so. I figure that's how long it'll take them to redo the codex. This sort of idea may be a bit alien to some of you out there, but I've been in the hobby for over two decades so far. Guard weren't my first army, I have quite a few for both 40k and fantasy as well as quite a bit of specialist stuff. But I do love my guard, and I figure I'm going to be playing with them until I get old, so I figure I've got another three decades at least ahead of me.

Beautiful work - I really like the urban theme you've got going, the camo patterns turned out great.

Keep up the great work, can't wait to see more!

That Chimera is looking pretty sweet. I love the lashed down stowage and the tarp covering it. What did you make the tarp out of?

@Dave - it's a baby wipe mate, Just leave them on the radiator to dry out and make sure you don't buy the ones with teddy bears imprinted on them.

awesome bit of DIY, how did you think of using a baby wipe!!??

if this army continues to grow as you plan it'll be very difficult to store and carry, but what the hell, it aleady looks great and adding to it wil only make it even better!!!! Im so jealous you've finished all this

Well, when you've got kids, baby wipes are one of those things that seem to appear all over the house.

One day I spotted a dried out one and thought ... I wonder. They're actually brilliant for tarps are they're more like thin cloth than tissue. Give it a go, you'll love the results.

On the storage, I'm quite lucky. I got quite a forgiving wife (think she's just accepted the fact, love me, love my models - lol) and I've still got a bit of space in my display cabinets.

Hey, if it grows any more, I'll be able to use it as an excuse to get another cabinet ;-)

Oh... my... lord... BABY WIPES?!?!? It is PURE GENIUS. I have them all over the place as well... and I never thought to use them as tarps. This is epic. We need to alert the press, and spread the news! No more lousy paper tarps that tear!

I have no idea how or why I keep missing your posts...grrr!

PS: I'm starting to think very hard about the long-term future of the Cadian 1/24th and 2/24th again at the moment. Maybe they'll merge, Strategic-Defence-Review-style...maybe not, but - like you - I do try to think long-term.

That said, unlike you, it takes me 18 months to complete a 10-man squad!

@Fox, glad you like it mate, give it a go and make sure you post some pics.

@Drax, you'll have to do a post about your long term / perfect army and then figure out how you're going to do it.It may take a while, but it'll be worth it.

I have visions of being old and grey, commanding companies of guard across a huge battle front.