Before I show you the latest additions to my command squads, I want to introduce a good friend who's just started blogging. Tolcrothlogan is a good friend, who's been a long time player of various system, he's been a propainter with his stuff on the front of Wargames Illustrated and an all round military buff. He's even an ex rupert, but we forgive him for that. Check out his blog at :-

He's new to all this blogging lark, so nip over and say hi, I'm sure he'll bring a lot to the community.

Now, onto the models. Sorry about the pics, with this winter light, I'm struggling to get decent pics. I really do think that I'm going to have to put together a light box. Anyway, I've painted up another selection of command squad models. 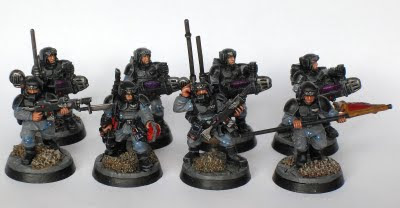 First off, we have four plasma gunners, I just love plasma and four in a command squad mounted in a chimera will be a hell of a headache for those marines.

Next up is a selection of command squad veterans. There's a new smaller banner for 2nd platoon, I decided the first was too grand from a platoon so it's going into the company command squad. The banner is actually from the the catachen command squad, so I snipped it off the arm and cleaned up where it joined the shoulder before mounting it on a normal guardsman. There's two vox casters, a standard plastic one which I put together first and then an old metal one which I found in my boxobits. Finally, another medic to finish them off. 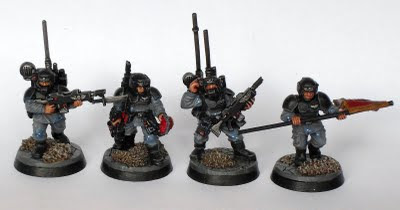 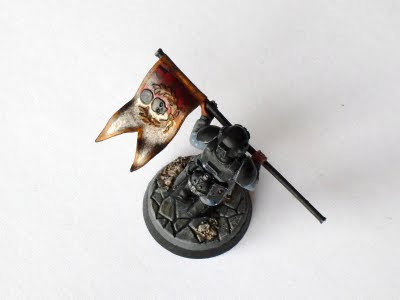 Hope you like them guys. These finish off my command squads, so I'll be posting a full pic of the company command squad as soon as I sort my lighting issues. 2nd platoon just needs a squad of guardsman and two heavy weapons squads to finish it off.
Posted by Col. Corbane at 09:12

That is a great idea for the platoon standard - I may have to give that a shot m'self as I have a mostly-unused Catachan command squad box for bits!

As always top notch work all around. Keep it up!

I second the comment about the standard. That Catachan flag is the least desirable bit in the whole command squad. You've done a bang-up job with it, mate.

Very nice conversion on the standard bearer. I especially like the bases for the models. Did you make that flagstone like flooring yourself out of greenstuff/ putty or are they pre-cast resin?

...and your mate's painting's pretty sweet - even for a Rupert!