With the latest TOEMP challenge, I've put myself down for painting up the rest of my command squad. As I went for the easiest for the three possible challenges, I had to take a hard bonus challenge, which meant challenging myself with sculpting, body positioning, converting and parts swapping.

Well, there wasn't much chance to get this done as part of the command squad as they're pretty uniform models. So, I decided to add a set of 5 objective markers to my painting total.

When I first came up with the idea, I thought about what the average soldier would see as an objective. Stores and Whores came immediately came to mind, lacking any suitable whores, I decided to go with casualties instead.

The first two are just simple stores objectives, nothing fancy here. One of the boxes was damaged, so I had to do a little GS fixing. 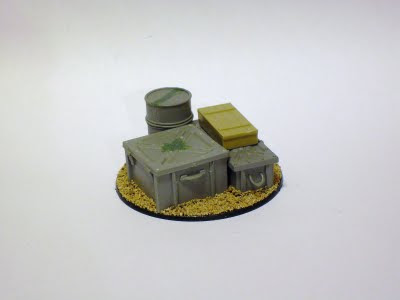 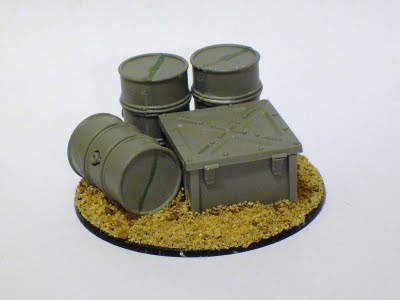 Next up comes a simple casualty taking cover in some rubble, nothing fancy on this one. 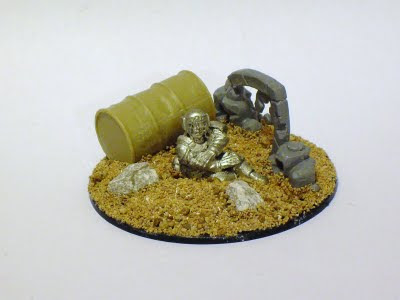 The second casualty marker was a bit more involved. I used fuss wire to represent the drip line, so this casualty is getting aid in the field. 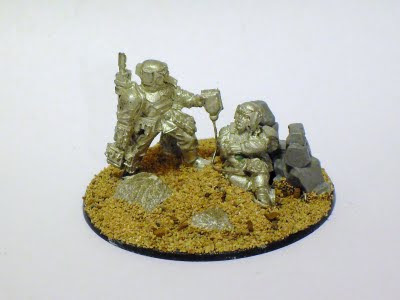 For the fifth and finally one, I wasn't sure whether to do stores or another casualty, so I did both, a casualty sitting on stores. This one was the most involved of all the objectives. There's a head mod, change in body position, hand swap plus adding a fag to his new hand. 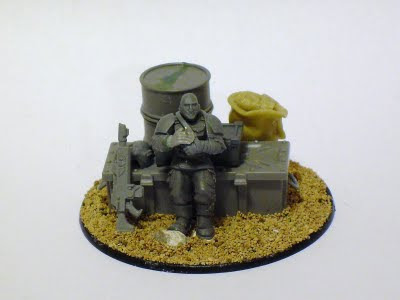 I've still got to add a few bits and bobs, then I'll seal the gravel with watered down PVA. Let me know what you think guys.
Posted by Col. Corbane at 12:16

The one with the medic giving plasma to the casualty is excellent and the guy taking 5 with a ciggy is great also. Nice work sir.

Maybe you could make a table surrounded by sandbags with a radio for a communications array?

Although your boys really ought to stop getting wounded in the arm!

Funnily enough, I'm working on something similar at the mo...

Great stuff. Hey, the guy giving fluids, I have never seen that one....where is he from?
Mike
Santa Cruz Warhammer

@NemFX - I've got that saved for a future project mate.

@Mike - He's the standard metal medic you used to get with the old guard command squad. All I did was snip the GW tube off, bend the arm a bit and drill a hole in the base of the bag for the fuse wire.

Where exactly do you get that fuse wire?

Great idea with the wounded! I've got a few of those sitting around and never had an idea what to do with them, so I hope you don't mind if I steal your idea. ;)

Love them. I've got some suitably 'stores' type objectives planned too. The converted wounded guardsman is great. 'Stores and Whores' was very funny, if not true.

@Hessler - I buy it from the shop around the corner, you get three different types wrapped around cardboard for a pound. Although, I might stock up as it's getting hard to come by now everyone uses fuses.

Great stuff Corbane - custom objective markers definitely add that little something extra to the games! Can't wait to see them painted up, I'm sure they're going to be simply awesome as usual...

I've got objective markers on the brain lately (working on my first 3 now) and these ones you've shown here are brilliant!

This one is unrelated, but why is your commander guy on a terminator base?

Thanks guys, I've already started painting them up, so it shouldn't be too long before I have something to show you.

mel, for the guy with cig, did you file down the head with the crap mohican from the command squad box?? I was going to do that myself as it really is a rubbish hair sculpt

Yeah mate, that's exactly what I did.