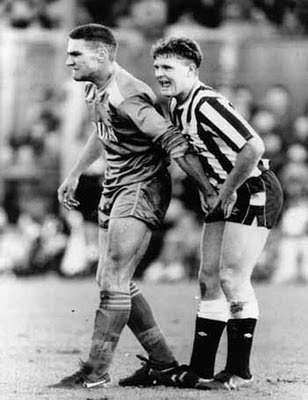 I'm a little worried about sportsmanship, as you're probably aware, I'm planning to go to the UKGT at the end of the year and I've been reading up on tournaments in general and reading up on the rules in preparation.

Now, from what I can see, quite a lot of players don't know the rules or pretend like they don't, and I'm getting a little concerned that if I start pointing out the 'correct rules' here and there, then I'm going to get shafted on my sportsmanship scores.

So, I was thinking. Isn't it a shame that tournaments don't run a system where if you have to call over a TO/Judge to make a rules decision, then the correct player automatically gets full sportsmanship scores and the incorrect one get none. I think that not only would this stop people using the sportsmanship scores to 'get at' a player who proved them wrong but also, it'd encourage players to sort out their problems themselves without calling over a TO/Judge for fear of being in the wrong and getting zero for sportsmanship that game.

That way, the only time they'd call a judge over would be if both players are adamant that they are right, and then it's down to the judge as normal. Now the only downside I can see to this is if someone gets a negative decision very early on in a game and so they've got nothing to lose, so keeps arguing over the rules. Perhaps a negative score for continued 'asshattery'?

Classic picture. I remember when BT used that as their advertising!

I've been worried about the same thing myself, but I havn't been to a GT. Although they seem lots of fun I get the feeling you get alot of them-what-hang-out-down-GW.

The one tournament I went to, Escalation 09 in Bracknell, dispensed with sportsmanship scores for the concerns you described. There is too much room for exploitation. I feel the tournament was better off without it!

You will always get players who will use the Sportmanship score to 'get back' at you, even if they simply lose the game. It can't be avoided.

If you can be very friendly, chatty, having a laugh throughout the game - even when flagging a cheat, or if you're livid inside - you will get better sportsmanship scores than you expect.

Maybe let the odd little thing go, but anything that will have a big impact needs to be jumped on, but in a lighthearted manner and a smile on your face.

I've known a couple of guys who won tournaments and Best sportsman in the same weekend, so it can be done!

Sportsmanship at tournaments is always going to be a muddle, I doubt you're going to find a perfect solution as long as jerks play. And if jerks didn't play, you wouldn't need sportsmanship scoring in the first place.

To be honest, I think your proposed system would have two effects and would end up benefiting the jerks more. One, once someone gets automatic full points from a ruling, they have no more incentive to be civilized for the rest of the match. Two, the even less scrupulous will engineer rules disputes they've carefully researched or pounce on innocent mistakes and demand a judge in order to get the full points.

Usually whomever is keeping track of the scoring will pick up on someone who is handing out low/bad sportsmanships scores across the board. The free roaming judges will often pick up on a person's negative attitudes as well.

I personally have never had a problem @ independent tournies & GTs. I wouldn't be afraid to ask a judge over for a rules query disagreement. If it comes out that you're wrong, just say 'my apologies' and move on with it. Just because you disagree with your opponent on a rule, regardless of outcome, doesn't make you a rules lawyer or a bad sport. In my experience, most everyone who play in those are looking more to play fun games outside of the usual gaming crowd. I know that the cut throat, win @ all costs types are out there, but things like army composition scores tend to weed them out, not to mention that if they're no fun to play against, they won't get a good sportsmanship score themselves.

I think you could minimize the 'being a jerk' factor after the judge by opting for a +1/-1 score instead of full/none.

If the judge rules in your favor, you get +1 to the sportsmanship score and the loser gets -1. This means that both sides still have room to improve/fall, so both players still have an interest in being good sports.

You can only control your expectations, your behaviour, and the scores you give. As long as you are clear and honest with yourself about all three of these you'll be fine.

You can influence your opponent's behaviour, and influence the scores they give you, but you can't control them. If you go into the GT expecting you can, you'll probably be disappointed.

I always approach the tournaments I play in with a hearty grin and a "Let's see how well I can do" attitude. Sometimes it can be tough (particularly when I'm getting caned by Nidzilla), but always go back to the old axiom "Why am I pushing toy soldier around on a table? That's right, too have fun!"

You'll meet some asshats, but that's their fault, not yours.

What is this obsession in the 40k world about "sportsmanship" about? Reminds me of trying to influence the lists people make. Pretty futile in my opinion.

Having your oppnent score you on anything is instant fail in my book. Won't work.

Disposing of unsportsmanlike people is something that is wanted, but making sure you have to butter them up is wrong.

Let the judges reduce scores if someone acts stupid. Plain and simple. Shouldn't run a tourney with too few judges in the first place:)

My advice is still to be yourself and know your game. Better to get a bad "score" from your opponent than have him make you his female dog… Seriously, the way sportsmanship is often done plays more into the hands of those the rules want to discurage!

I wouldn't worry about it too much dude, at the end of the day it's going to be a something you have to accept before entering the GT's.

It might suck, but it's part and parcel, and as they say a life lived in fear is a life half lived?

If you act yourself, and game like you do at the club then I'm sure the sportsmanship scores will be cushty.

Thought provoking post, as always. I liked it enough to spawn a reply of sufficient magnitude to create a post of my own. It's scheduled to go up tomorrow at: http://www.warhammer39999.com/2010/01/sportsmanship/

Feel free to delete the link if you'd like.

So basically, just go with a smile on my face, try and enjoy myself and don't worry about sportsmanship scores?

Sorry to anyone subscribed to these comments by email. I was trying out letting anyone comment and the spammers jumped onboard.

In future, it'll be registered users only, just make sure you don't click any of those links.

I don't know when the GT is, but (without wishing to sound patronising) it's doubtless worth trying to get your foot in a couple of small tournaments in beforehand.

I rarely play and had never gone to a tourney, but going to the 14-team 'Calneage; one-day tournament last September was great: a real good laugh, and the people were very welcoming.

Start following our trades NOW and make up to 270% per day.