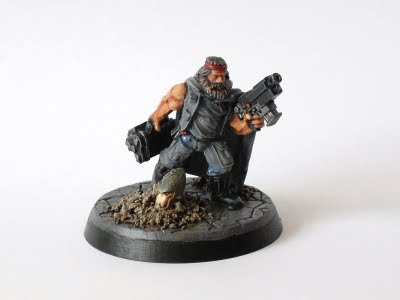 Had a game down the club on Friday night playing against Andy's eldar. Playing Andy is always a pleasure as he plays the game for a laugh and it doesn't matter who's winning or what's happening on the table, we're always laughing. Well, this game was no different, and we were clearly the loudest players in the club with shouts 'YES!', 'NOOOOO!' and numerous quite offensive insults been thrown back and forth, it's just the way we roll.

We were playing capture and control on a spearhead deployment and it was clear by the end of turn two that the best I could do was going to be a draw. My objective was protected by a good chunk of 2nd platoon, around forty models and they'd already dealt with his scorpians, avatar and only had his ten man harlequin coming at my lines which worried me quite a bit as if they got into combat, it'd have been a slaughter. His objective was protected by fire dragons, dire avengers and howling banshees, so I didn't have much chance to getting to it with what I had left. So, all I had to do was deal with this 310pt killing clowns advancing in the clear using veil of tears to stop me shooting them.

The clowns got pie plated, scoring 9 hits and then failing 8 4+ Inv saves. The remaining two charged Marbo taking one wound whilst he killed one in return, drawn combat. The scene was set for an epic battle between the hardened loner with a single wound left and a 5+ save against the xenos Shadowseer. Attacking on I6, the xenos went first and this is how it played out over the next 3 rounds of combat.
The roof went off, an epic battle had been fought and Marbo was victorious! Both me and Andy abandoned the rest of the game and both agreed it was the best game of 40k we'd ever played.When I got home, I worked out the odds of rolling those dice for Marbo's saves - 1 in 15,552!

A so, I make this solemn promise that the Corbanian 1st will never go into combat without him again. I'm also going to keep this post a service record of Marbo's actions in combat. So, without further ado .....


CSgt Marbo (24909925) - 571 Infantry Company
M20090130 (Gateway sector) - CSgt Marbo ambushed a retinue of xenos harlequins threatening to overrun Imperial lines. CSgt Marbo killed all but the xenos Shadowseer in the initial ambush whilst receiving a serious wound himself. CSgt Marbo then defeated the xenos Shadowseer in a prolonged hand to hand combat where he sustained multiple wounds counting no less than six. For this action, CSgt Marbo was cited in Regimental Orders, and mentioned in Dispatches - END. 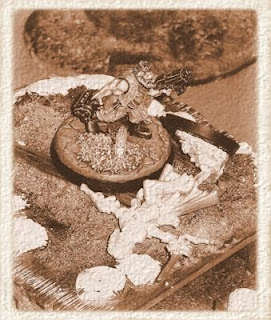 M20090212 (Gateway sector) - In a surprise attack by the Angels of Blood Astartes chapter, CSgt Marbo received a shrapnel wound whilst preparing to attack a Rhino transport vehicle that was destroy by Vendetta air support. Whilst wounded, CSgt Marbo ambushed a Death Company squad that had evacuated the Rhino transport killing 8 Death Company Astartes marines before becoming seriously wounded and unable to continue the fight by bolter fire from a supporting dreadnought. CSgt Marbo was cited in Regimental Orders - END
Posted by Col. Corbane at 08:03

Sounds like a really cool battle! One question, I thought Harlequins only had a 5+ invulnerable save.

Wow - there's one for the Marbo family album!

It's awesome when the most unlikely of things happen!

I need to mod me up one of those guys.

Bah, just like the guard to over-inflate their accomplishments. Since Marbo would've saved either on a 5+ or a 6+, the odds of him making the saves for that combat were really only 1/1728 (mind you, that's still fairly astronomical).

When he got back to base-camp, I'm sure the rest of the soldiers were putting on their boots--'cause it was getting pretty deep around there...

P.S. Love the flavor this kind of thing adds to a game. This really is what 40k is all about. Thanks for sharing...

@Neil - It was mate, and if Harlequins are a 5+, I can forgive Andy as he's mainly a fantasy player and it was his first time out with his Eldar army.

@Soundwave - Every guard army needs a marbo, get one on the go mate.

@W39 - History is written by the victor mate. The odds quote was more about the fact that out of 6 dice rolled, I rolled a 5 and 5 six's. I know car dealerships that you can win cars at with dice like that - lol. But yes, passing his saves anyway is pretty impressive.

@Drax - lol and yeah, I'll be building up quite an album hopefully.

That would had to be a very good laugh indeed! Love when these kinda things happen.
Remembers me of a game where I faced a DeamonPrince with 1 wound left and wanted to do Warp Time. He made the psycic test with snake eyes, thus suffering one wound. As he had to reroll the inv. save if he passed it, the opponent thought the Deamon Prince was dead (5+inv save). He rolled a 5, and a 6 after that. We had such a great time that evening, we still talk about that turn whenever he plays against me.

Very cool, loving the mention in dispatches! I may have to do something similar for my model. I think if he gets enough honours you'll have to model on a medal somewhere!

@Dannis - I think it's moments like these are the reason I play the game. Wins and loses will come and go but we'll be talking about this scrap for years.

@SS - That's the plan mate. If he ever gets damaged beyond repair, then he's definitely getting the VC.

This post was full of AWESOME. I love your Marbo model, and it is fitting that he kicks so much butt. I am pleased to see that you are going to be tracking his individual accomplishments! This should be good.

but you should probably not use him anymore. He is way to strong...My buddy used him once and in one swoop destroyed an entire squad of Ork kommandos incl Snikrot. He abandoned marbo to his diplay case. He is a very (too) cheap game changer. I am going to build one just for fun but I am not ever fielding this guy. I am going to use your model as inspiration.
Mike
SCW

@FP - I'm going to be including the good and bad in his service record, so expect to see a report on him blowing himself up with his own demo charge coming sometime soon!

@Mike - If someone had told me a year ago that I'd have a character that was 'way too powerful' in my guard army, I'd have fallen off my seat laughing mate. I'm not sure on retiring him just yet, I've yet to face these new space goats and the rumours regarding the BA character are a bit concerning. Can't wait to see what you come up with as your stuff is excellent.