Sometimes I wonder where GW gets their ideas for models and armies, and sometimes, I just know.

I'm not sure if you hobbyists across the pond in the States get the TV series Sharpe, but it's been on TV for quite a while over in the UK. It's a BBC production about an officer called Sharpe who raises through the ranks during the Napoleonic Wars. 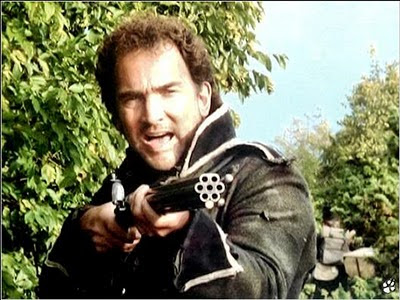 When Sharpe was first given a battlefield commission, he was given command of a detachment of the 95th Rifles, an elite group of chosen men. This detachment was led by Sgt Harper, a brute of an Irishman who carried a multibarrel rifle that only he could handle. Does that sound familiar?

Email ThisBlogThis!Share to TwitterShare to FacebookShare to Pinterest
Labels: Harker

I've just finished a couple of Sharpe books, great reads. I also live in Whittlesey, birthplace of Sir Harry Smith and if you know your background to Sharpe then you know that Sharp was partly based on his life.

About 2 years started watching Sharpe on German late night TV. I must say I wasn't impressed because the accents just really took a lot away. About 6 months ago I found the 3rd season on DVD, and I'm working my way through all of them now.

Re: Harper/Harker, until you said it I never even noticed the connections...

I love Sharpe, and Sean Bean.

Yep. I'd agree with that (that Harper is the inspiration for Harker - not neccessarily my unrequited depth of emotional attached to Sheffield's favourite son).

Got the complete box set of sharpe last bday. I love sharpe. I think it was the last of the itv greats! Harker to harper? Fairly ballpark. Could have been subconscious, nothing more... But it makes sense.

Glad I'm not alone thinking that Harker was pulled from Harper. ;)

I have a pile of the Sharpe books, all fantastic reads. Weirdly enough I never made the connection, although it does make sense.

@blitzspear - I didn't know the background, thanks for the education matey.

@marshal argos - You've got to forgive it a bit, it's showing it's age but still brilliant IMHO.

@king elssar - I'm with you matey.

@zzzzzz - You'd have thought they'd have changed the name a bit more though wouldn't you.

@admiral drax - I like both Beans, Sean and Mr!

@suneokun - My brother loves them, he's got an entire army of the 95th. Personally, I reckon it more than just subconscious, but we'll never know for sure.

@rob - Great minds matey, glad to see you're still around. Did you ever GS your Harker into a Mordian?

@2501 - Yeah, Sean would be an excellent Gaunt, although I think a film would spoil the books, so I'd rather not see it become true.

Man, the UK has such better television production than us in the states. I am definitely buying this Sharpe series. I love television based on war, and Europes' Napoleonic era is one of my favorite settings

I have never had the pleasure of seeing this series, but I'll see about checking it out online. I've heard great things about the series though.

Added note: That song is awesome, I love traditional Scotch, Irish, and English songs. Thanks!

added the first episode to my netflix que, show looks pretty awesome. Are the black coats historically accurate or are they designed to give the main characters some more induviduality?

@vern - They're actually dark green mate and yeah, they're historical. They were the first sort of camo as the 95th were skirmishers/scouts and not line troops, although I don't know if the colour was picked intentionally for this purpose.

Who writes the books and what's the show called? Are the characters different?

This seems like something I want to look up - I've got to admit, I miss the production style of British TV. I got used to it when I lived in England.

I think ImperialJustice18 is being a bit hard on American production; HBO and Showtime are top-notch, and some syndicated is decent.

I just love the historical stuff - much like the rest of you - and that can be hard to come by on this side of the pond.

All the info you need is here mate ...

It's a bit dated but still damn good entertainment, and I've got to say, I love some the HBO stuff - can't fault Band of Brothers.

I remember watching Sharpe when I was little, it is still a fantastic show.

HBO do some great stuff, especially Band of Brothers, I'm not so keen on The Pacific though, I just don't find myself getting 'attached' to the characters like in BoB. The show feels a bit too Hollywood? Seems slightly detached.