As the sculpting on Harker gets closer to been finished and ready to paint, my thoughts have been on his squad. Since Harker is a metal catachen model, I'll be using metal catachens for his squad. Luckily, I have a few to choose from as you can see. 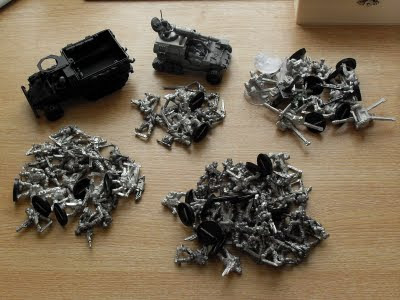 Being veterans, they've got a host of options available to them especially considering that the squad can take upto three special weapons, a heavy weapon, shotguns and even a demo charge if I add a doctrine. So I've been thinking about how to kit them out.

Choices, choices, so many choices, it's like been a kid in a sweet shop .....

Now the basic choice is Tactics vs Hobby, and it's a biggy! You see, I've always considered myself a hobbyist but I like to play games and I like to win. As a hobbyist, I'd take a wide range of different weapons giving me a wide range of hobby opportunities. As a tactician, I'd go for multiples of the same special weapon because I'm more likely to use the unit in a specific role. The down side to this is that it means that I'll have multiple of the same model in the squad since the metal catachens only have one model for each weapon type.

I pondered this for quite a while, and then decided that the hobbyist side of me won, here's why ....
Once my mind was made up, it was time to pick the actual models ..... 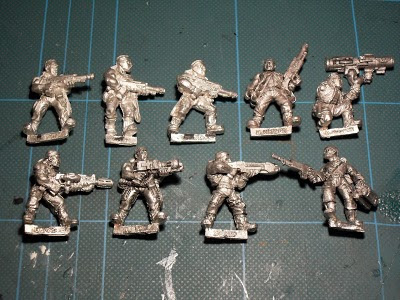 As you can see, I've gone for a good mix of guys. I've got the missile launcher team for my heavy option as it was the only heavy weapon that wasn't wheeled as I didn't think that a wheeled weapon went with an infiltrating squad. I've also taken one of each of the special weapon options for a bit of variety and I've even added a demo charge guy in.

There's plenty of work in them but I'm hopping it won't take too long to get these guys greened up and ready for painting although don't expect me to be turning these around in a week - lol. Harker's taken a lot of a time but that's because I've had to do little bits and then leave it to cure overnight, as so only a little has got done each night. With these guys, I'll be able to do a bit on each every night, so hopefully I'll get them done in roughly the same amount of time as it's taken me to do Harker.

Harker is just getting his last green stuff touching up, so I'll be posting pics soon. I get the feeling this year is going to be quality rather than quantity!
Posted by Col. Corbane at 12:14

I've been fielding a Harker squad with Chimera, plasma gun, heavy bolter team, and Demolitions; it's been pretty fun, but haven't had much opportunity to pop the demo charge.

I'm really eager to see how your squad turns out!

I'm not a huge fan of the Catachans, but that's an ideal mix you've got there.

You have given us a glimpse into your HARKER model which was tease now that you have shown us the basis for the rest of the squad. Yes they are metal models however with your green stuff and creativity I can only imagine what this squad will end up looking like. I just hope I can spot them before they get a bead on me.

1. A week is plenty of time, get to work soldier.

2. I'm glad the hobbyist won out. It reassuring for someone like me who does the same thing. I just finished a Scout squad to add to my Deathwing.

I find when I'm doing fiddly things and it's all going horribly wrong that get an overwhelming urge to launch the offending thingy as hard as I can into the nearest wall/floor.

I've not atually sucumbed to that urge for that last twenty years or so, but still experience the same level of frustration.

Still sat in wonder at your levels of perseverance.

This is all great, I have one problem though...The part about it taking long...yea we want it NOW NOW NOW

Cant wait to see the GS work on these models dude..im sure it will awesome.

you have quite the graveyard of models there! lol

I've been contemplating the same question with my Blood Angels. Luckily the Hobby side won out like you. Good luck Colonel.

I personally would have taken the best of both worlds, which would have ended up to be far more work... Seeing as you have so many of the models I would not feel bad about chopping one or two apart and either re-posing or even doing a simple head swap and blending the offending joints with GS since that will be a step anyways. That way you could get the variety you so crave (I understand COMPLETELY) and you get a tactically sound group. I know first hand just how much of a pain the metal models can be to convert, but it can be done. Either way I can hardly wait to see the finished squad.

@Allandaros - They do seem like good allrounders, although I'd love to field them with plasma guns and go AP2 hunting.

@Admiral Drax - Neither am I mate but for vets, they work quite well. Not sure I agree on the flamer though.

@HotPanda - Here's hoping they live up to your expectations and perform as well. I'll be posting Harker tomorrow hopefully.

@Ron - A week is just not lng enough mate, not of an OCD Hobbyist.

@Zzzzz - I've been very restrained with Harker mate, I've walked away steaming a few times, that probably why he's taken so long to do!

@CanolliCrusader - Hopefully you'll be getting a gs fix with Harker tomorrow mate.

@k.blas - Cheers mate, it's always best when the hobbyist side wins rather than the darkside.

@Jason - It never even occurred to me mate, now you've got me thinking!