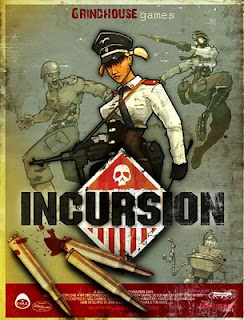 During a recent visit to Worlds Wargames at Derby last month with little man and my good mate Mike, I picked up a copy of the board game Incursion from Grindhouse Games. Some of you might already know it or have seen the excellent charity auction copy over on Dave Taylors blog. With my gaming time been limited recently, it turned out to be an excellent buy!
The game is based in an alternative WWII setting, and by alternative, I mean alternative. The German special weapons division has managed to create all sorts of weird and wonderful weapons including a gas that reanimates the dead into German zombies, as well as Werewolves, superhuman sexy Nazi guys and a whole load more. Now, you may say how do the allies possibly stand a chance against things like that. Well, they’re packing diesel powered power armour that been reversed engineered from a spacecraft that crashed in the New Mexico desert. The action itself takes place in a tunnel complex under the Rock of Gibraltar where the Nazi’s are holed up and striking out at the shipping through the Gibraltar straights and it’s down to the Lucky 7th to go in and ‘resolve’ the problem with excessive force. With a background like that, it’s hard not to get dragged into the story!
The game itself is board based, with everything you need in the box, including the rules, reference sheets, special effect and event cards, diecut standup model pieces and doors. Overall, the production is a top quality one with excellent graphics with only the odd ‘photoshopped’ bit on the board and you only notice them if you really going looking for them. The graphic design done by Tears of Envy is truly excellent and just drips comic book gruesomeness and really adds to the game itself.
It plays a lot like Space Hulk, we've each side getting picking their forces based on a number of requisition that's specified by the mission brief. Various troopers in the force have various abilities including the ability to effect the other troopers in their force. Roughly speaking, the allies are slow moving, heavily armoured and packing serious firepower whereas the axis are made up of waves of close combat zomies, fast moving werewolves and other nasty's.
The game is turn based with initiative been decided by a bidding system using command points, which can also be used to supplement an individual models actions. Another interesting element are the event and effect cards which have various effects on the game and can prove game changing. These cards can be voided by other special cards or by spending more command points, and so the game has lot's of twists to it.
It plays very well, with you getting to grips with the rules relatively quickly. There's an overwatch rule which is a bit silly as it allows unlimited firing during the opposing players turn as long as you didn't have a line of sight to any opposing models at the start of the turn. Also, the command points and cards can allow certain models do cover serious ground or killing loads in one turn, which can leave the other player feeling like they've just got no control in the game. Luckily, these things happen very rarely, and so don't really dampen the game at all.
Overall, it's a great game, supported by an excellent range of models for those who like a more miniature based game. There's also a missions supplement coming out soon, which I'm really looking forward to. So, if you're looking for a board game to have a laugh and a good night's gaming with a mate, I wholly recommend Incursion.
Finally, check out the charity auction on Dave Taylor's blog, if only to see his excellent Incursion models up close. Right, time to crack on with some 40k stuff, more posts soon guys!
Posted by Col. Corbane at 13:25

Email ThisBlogThis!Share to TwitterShare to FacebookShare to Pinterest
Labels: Incursion

Hey Colonel, thanks for the plug! Great to know you like Incursion. I really enjoyed painting the figures, now I just have to paint my own set and get playing ; )

But Gents, I need your help, please: would my Wife want to play it? - that's the question.

Looks like an awesome game just the setting! 1949, gibraltar, zombies and zombie bombs!

Please share some thoughts when you have played it!

@DaveTaylor - No worries mate, hope the auction generates some cash for your friends. You've got to give the game a go, it's a blast!

@Admiral Drax - The rules seem a little complicated to start with, but if she likes the theme, then she'll probably enjoy it.

@The Belgian - We've already had quite few games and they were great. It's perfect if you and a friend have a few hours spare. I'll post more as we play more matey.

Try Secrets of the Third Reich if you get a chance; This board game was based off of it and its very similar but expands to tabletop play.