I broke out the green stuff and sculpting tools this week and managed to make a little progress on Harkers squad. My plan was to get their cap badges done. It's been a while since I last sculpted so I was a bit worried that I'd wouldn't be able to pull it off. Surprisingly, they came out pretty well, although it took a few attempts to get it right. Here's how they turned out ... 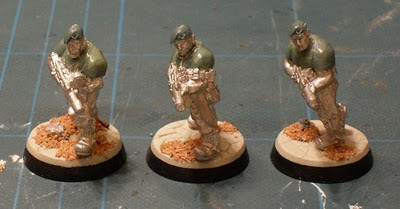 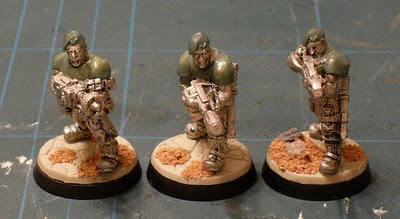 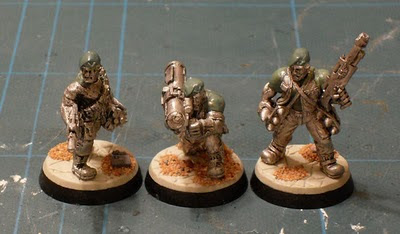 Overall, I'm pretty pleased with how they turned out. Some of them are pretty good and some are a bit iffy, but I'm not being too critical on myself as it was my first attempt at sculpting such small details.

What I've learned this time ...
I also finished off their bases, which means all I need to do now is to give them cloaks. Unfortunately, they're going to be on hold until I can find a decent tutorial on how to make simple cloaks from green stuff.

Hopefully, I'll find one soon and get these guys finished and ready for painting. In the meantime, I'll be cracking on with my Starstreak Hydra's.
Posted by Col. Corbane at 15:31

Excellent (green)stuff ! Do they really need cloaks? I'd be tempted to paint them camo and pay the points for camelioline t shirts.

But I suppose that's why my armies all look unfinished.

Thanks guys, glad you like them, they've been a hell of a labour of love.

@Zzzzz - I like to use cloaks to represent guys with the stealth ability mate, so it's a theme across my entire army. Also I don't want to cop out on them as they're also about pushing my sculpting ability.

I just need to find a decent tutorial, looking back, I don't really like Harker's cloak anymore.