I've been busy these past few day, busy adding more armour to 152 Armoured Assault company. Vehicle number 4 is a demolisher. It's an old pattern demolisher that I've had built for a while but never got round to finishing. 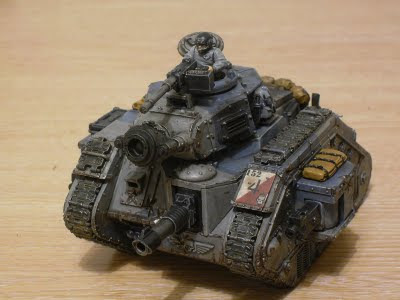 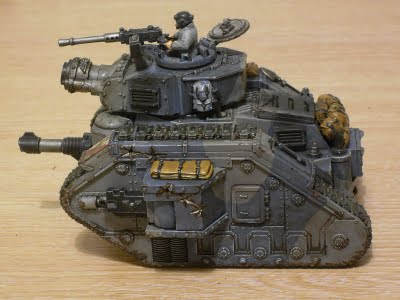 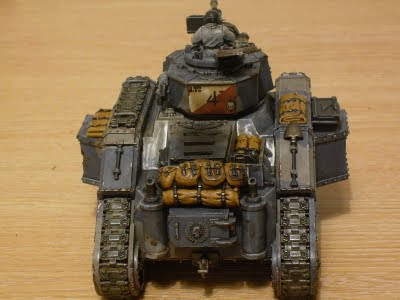 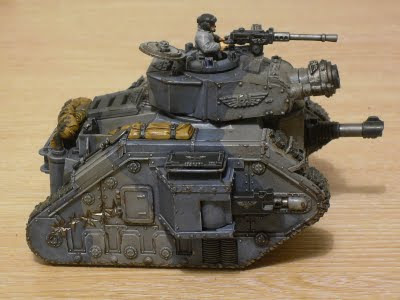 I'm not sure what sort of Russ variant I'm going to do next, I've got the standard model along with a FW vanquisher and executioner turrets. Any suggestions are very welcome.

Along with a few other bloggers, I've embarked on 73rd's painting challenge. Although I was too late to take part in the first challenge (I joined quite late and was already working on the demolisher) I'm ready for the second. We've been challenged to paint 125pts worth of elites by the 27th!

So, I've dug out my codex and Marbo and six ratlings come bang on 125pts, it must be fate as I happen to have the perfect Marbo model and six cadian snipers. Yes, I know they're not ratlings, but there's no way those ulgy RT kickbacks are making it into my army, basically, I just don't like the models.

I'm planning to sculpt a cloak on Marbo, but this is going to be my first bit of real sculpting. If anyone knows any good tutorials on scultping cloaks, please let me know. Must admit, it's a bit daunting, but the whole point about me taking on the challenge was to challenge myself, not sit in my comfort zone.

I never been to one before but with my local club closed for the summer (don't ask) I'm a bit staved of gaming. When one of the group sorted an impromptu tournament, I thought what the hell!

It's on Saturday, 1750pts, 4 games and I'm taking guard. That might be a bit obvious but I know the guys at the club frequent my blog and I'm giving nothing away ;-)

Not the sort I plaster over my Russes, but the sort we store our models in. In an ongoing attempt to keep my nearest and dearest happy, I'm been sorting all my boxes and bits into stack and store boxes.

Well, if you're in the UK, I'm found a blinder, Morrisons are currently selling two 25ltr stack and store boxes for £7. It was such a good deal, I got eight for less than the new Russ kit. They're the green topped boxes in this pic. 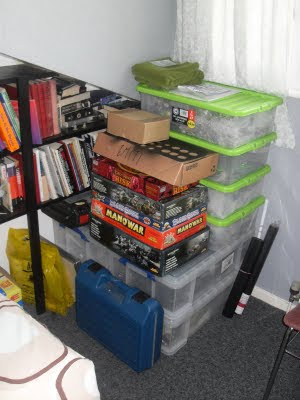 That's all for now folks, WIP pics of Marbo and the snipers coming soon.
Posted by Col. Corbane at 15:08

That demolisher came out really nicely, well done! I presume the armour is codex grey and shadow grey with a brown wash over the top?

I'll have to take a trip down to Morrisons next week once the paycheque is in - my hobby stuff is long overdue a good sorting...

Try checking coolminiornot.com for cloak tutorials. But even with them I quite struggled with scultping the one for my Comissar Lady.
Demolisher looks sharp, just like all your stuff. :)

Great work on the demolisher. I'm not usually one to add packs and the like to my tanks, but I like the ones you've got there. Did you make those backpacks or are they from another source?

@Hal'jin - Thanks for the link mate, hadn't thought of looking there.

@Kevin - The packs on the back are from the Verlinden's 1:35 Tank Crew Gear pack (82). Verlinden do some great accessories.

BRILLIANT in all respects. Thanks for sharing!

And you're right about the use of Cadian snipers. Those new Ratling models are very characterful, but I refuse to subscribe to Hobbits-in-space-via=four-degrees--separation.

Cheers for the Morrisons tip too.

That Demolisher is fantastic mate! I really like how you paint, it's very authentic indeed. Trully fitting for the 40k Universe

I've never been a fan of the Demolisher short and stubby turret, but you've done a nice job :)

I'm also not sure on the WW2 tank feel with all the bags, spare tracks etc ont he outside just as tanks did in WW2.