I've seen this Masters brush soap mentioned in a few places around the web, and so when I was picking up some sculpting supplies and I needed to make up a minimum order, I decided to add it to the basket. A small tub only costs around £2.50 and after using it, I figure it's going to last me at least a year or two, so there's no worries about the cost factor.

I'd never used it before and so I decided to hit up the guys on Google Buzz and see if any of them knew how you used the soap (Buzz is great for getting quick tips and feedback, if you haven't already tried it, you really should). Green Stuff Sculpting came back with a couple of links to these Youtube tutorials ....
Once I was up to speed on how you used it, it was time to give it a challenge and I had just the right brush to really test this stuff. Bring on my base coat and washes brush, I've been using it for over a year, loading it up with chaos black and devlan mud. To say it was matted and stained would be an understatement! It had solid paint for about 3mm past the edge of the ferrule and everytime I wanted to use it, I'd have to soak it in water  to break the stiffened bristles. If you look at the pic, the one on the top is my basecoat brush, the one under it is the same type of brush that hasn't been used yet. 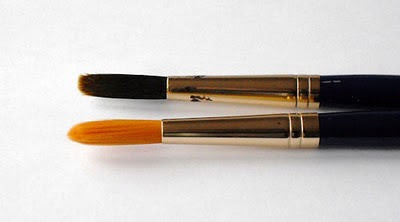 I got stuck right in, building up a lather and then rinsing time and time again. In total I did it six times, although I could have continued because paint was still coming out at that point. After the six washes, I was left with ....

OK, it's not back to brand new but it's a hell of a lot better than it was before. I've got to say that if Masters brush soap can do this with my basecoat brush which was just abused for a year, then it's going to have no problem looking after my regular brushes.

I'd highly recommend this stuff to anyone who puts paint on their models, and not just serious painters. Anything that can extend the life of our brushes has got to good, especially considering how expensive they are. I just wish I'd got some years ago, it'd have saved me a fortune!
Posted by Col. Corbane at 10:05

I have to agree, I wish I'd found the stuff years ago.

Good article and nice examples! Looks like we're running on a similar wavelength... I took a different approach but I like the example of the restored brush.

That is a good product, I have seen very good results using that. Keeping your brushes clean and in good condition is extremely important.

I've been using this stuff for years! It is indeed mighty.

sounds like goods stuff, just wish i could see your pics but there not displaying on here or my own blog at the moment.

I have actually been meaning to get some of this stuff myself, not that a lot of painting gets done around here.

I am glad that links were of use, lucky I subscribe to virtually every hobby channel I come across.

I agree, Masters rock. I found a good place to order from in the UK, as it is not available in Hungary. I recommend it for all mini painters!

Oh, that looks good. Wonder if I can get it in Poland.

This stuff does look the business - I just wish it was cheaper. £12 for soap, or a new Peacekeeper model for Malifaux? ;)

I've been using this for a few months. It works great!

@Dverning - Great minds matey, I like your approach, I bet you didn't have a brush as abused as mine - lol.

@Jason - It really is mate, it's one of those that you wondered how you got by before you used it.

@Vinny - I can't see it not been in my paint box from now on mate.

@GSS - You have way too much time on your hands mate, I'm envious!

@Veghist - Mine actually came from just down the road, I should have just nipped down and picked it up and saved the postage mate.

@Hal'jin - I'm sure someone will post it there mate.

@Uncle Puck - Now there's a thought, I've no idea mate but let me know how you get on.

@Sholto - £12, that's expensive mate, have a look around, I'm sure you'll find it cheaper mate.

@to Kevin - I'm looking forward to seeing what it does with my other brushes. Do you use it after every painting session?

I don't use it after every session. Mainly I use it when I've got paint up on the ferrul. I figure it's deep up inside then as well. So the brush gets cleaned with this about once every three or four uses.

woops...sorry for the multiple posts :P