Doing it for the kids!

So, I got collared by the little man's teachers again. It seems that this terms theme is castles, and they asked me if I'd make them one. After a brief chat about want they wanted, me and little man got stuck in.

First off, we had a team meeting and decide what was going where, little man helped draw up the plans and the commissar modified them as she saw fit. 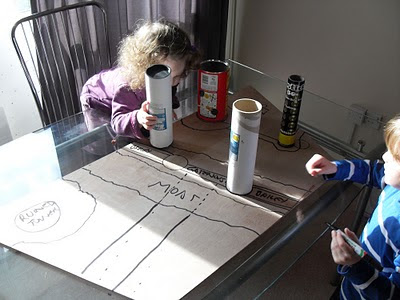 After the initial polystyrene earthworks were cut out, little man got stuck into sticking them down under the careful supervision of the commissar. 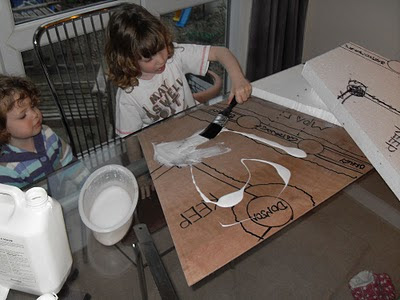 It didn't take long for things to start shaping up, it was at this point we realised that the towers of the gate house were going to be a bit big. 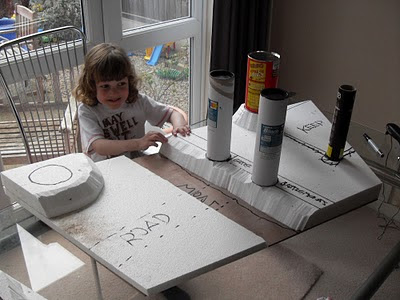 Work then started on the gatehouse, we have to be very careful when dad's cutting! 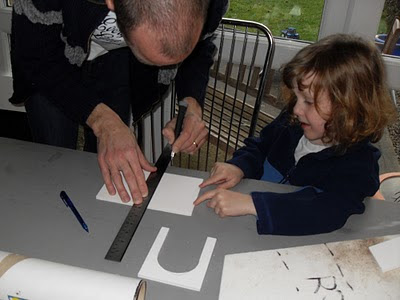 While dad cracks on with cutting, little man gets on with gluing the cut down towers of the gatehouse, he loves his gluing. 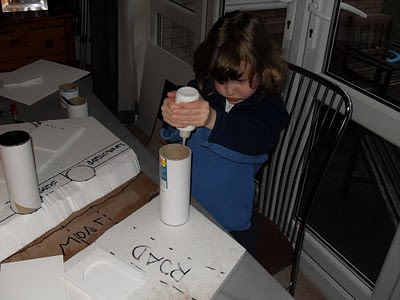 The backwall goes in first, along with the two cut down towers. We kept the plastic lids in the tubes to make the floors of the turrets. 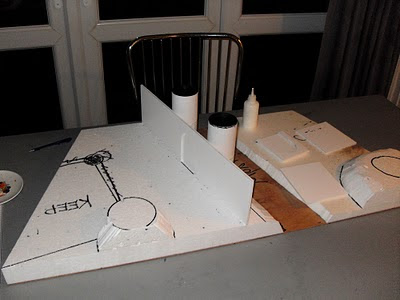 Once they were dry, the spacers and the front wall sections were put on. Little man did a great job doing this. 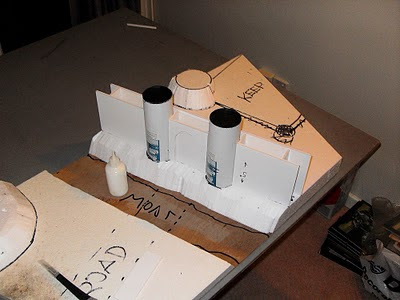 After the basic wall and gatehouse sections were dry, we added the battlement floors, crenellations and the turret walls. The turret walls are just cardboard taped and glued in place. We started to papa mache the whole structure, part of the brief was that it was going to have to be able to take a lot of hammer from a bunch of four year olds, and I know from experience that papa mache gives scenery a lot of durability. 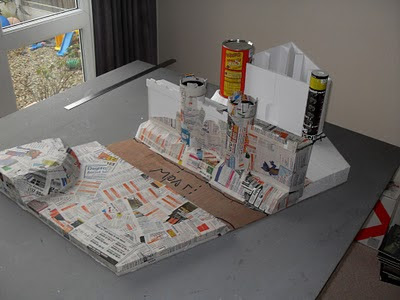 We then put together the main keep and the donjon tower, adding struts to make it sturdy. 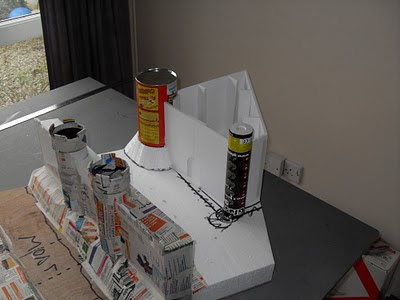 Little man got stuck into getting the top of the donjon ready for it's roof. It was at this point whilst typing this blog that I realised that perhaps I shouldn't have taken the piss out of my older brothers baldness so much ...... 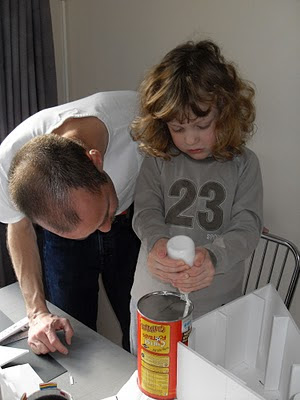 Then the roof went on, he's got a steady pair of hands for a four year old. 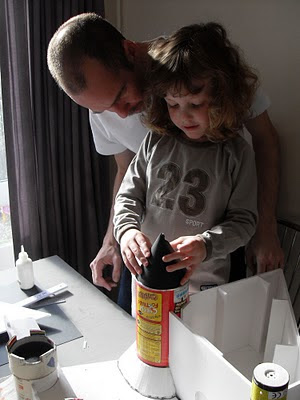 Work then continued on adding a roof to the keep, followed by the crenelations for the main keep roof, donjon and tower. We also added a basic bridge, a drawbridge would just have got trashed. 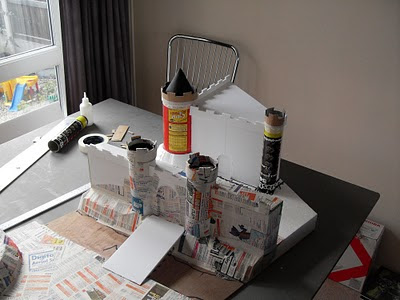 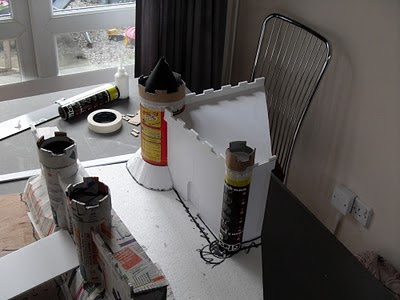 One of the last jobs was to add a ruined tower that I made using my new hot knife. This was to show the kids that even in the medieval times, people still recycled. 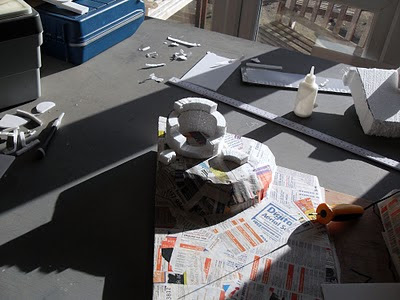 We finished off by going mad with the papa mache, and covering all the rock faces with plastoparis bandage. Once it was all dry, it ended up looking quite good. 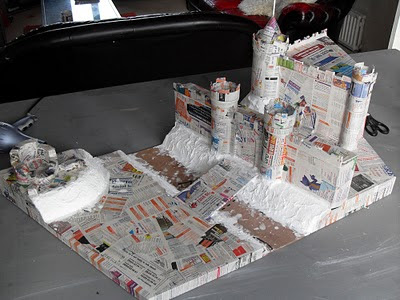 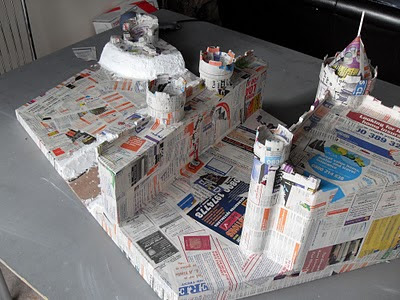 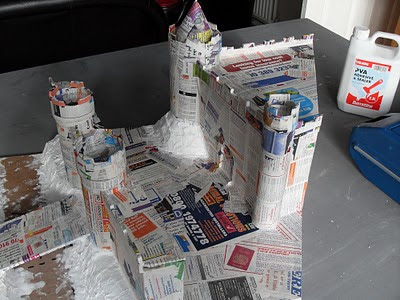 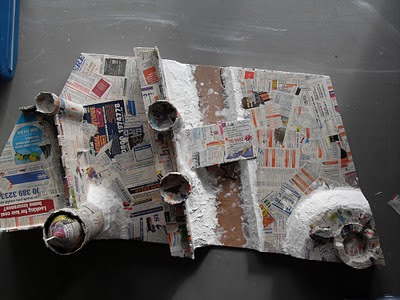 Once that was all dry, we were done. The brief was that it had to be sturdy, which it was, it had to have a moat, battlements, gatehouse, keep and donjon, which were all covered. So overall, a good job that only took a week in total. They didn't want it painted as they wanted the kids to do that, so this was the end of the project for us, which was a bit of a shame as we both wanted to paint it.

Well, another term starts soon, I wonder what they have planned for us for the next term.
Posted by Col. Corbane at 05:42

It's looking great, and I love projects you can bring your kids in on (not much of that in this hobby!)

Great looking bit of scenery! I won't be showing this to my girlfriend though, she'll just get broody again haha

Incredible mate, well done.
Looks like I need some pics of pringle tubes and then I'll steal your piccies here (for you know what ;) )

What did you use for that triangle piece on the tower?

Little Man's got himself some serious hair!

That is great stuff.
I am afraid if my sons and I tried that....well, I think more of the glue would have ended up on us!!!

We built a school project castle like this, once. Nothing compared to this masterpiece. Nicely done!

Nicely done sir- and the little man acquitted himself quite well. Cheers!

Ha, this is great! Good job guys! (teacher paying you for this?) :P

Don't lament the loss of hair colonel, it just means that the heat created by that big ol' brain is drained off faster. Or at least that's what I keep telling myself.

I love the finished castle. Make sre you snap a pic for us once the kids have painted it!

That's a great castle - I'd love it at that age! (And probably still would).

Your kids are lucky to have a Dad to help them with things like this!

I love what you've done there. I can't wait until I get the chance to do things like that with my kids.

If only I had the same skill heh

Just like sonsoftaurus I love your sons hair. Very awesome. And your castle just gets me fired up to make a Helms Deep... But that's a fair while off. Gotta get my own place first for that one...

Nice work.... I remember when I was a kid my old man and I built a model of the solar system for school... So congrats on a memory the kid will carry forever... At least I did...

@Sholto - Thanks matey, scenery's one of those projects that the whole family can get involved in, I think it's one of the reasons I love scenery projects so much.

@Soundwave - Cheers mate, and yeah, my kids have that effect on women, best not mate. lol

@Tristan - Go for it mate, the cone roof was just a bit of black card mate. 3/4 of a circle rolled up. Hope that helps.

@Sonsoftaurus - Cheers mate, and yes, he's got serious rock hair. He's got more pulling power than a puppy in a park.

@Magilla Gurilla - Thanks dude, we normally get coated in glue and paint but that's half the fun.

@The other Kevin - Thanks matey, god only knows what they got planned for me next.

@Max - Cheers mate, he is a most excellent castle builder!

@CanolliCrusader - Cheers matey, I wish they were paying mate, but then, it is for the kids - lol

@ImperialJustice18 - That's life mate, hopefully I can use it to a tactical advantage in the future and dazzle my opponents.

@Farthestgoose - Cheers mate, I'll have to nip into school and get a photo of it.

@Frag Dad - Cheers mate, thanks for the kind words.

@Damian - Cheers mate, I'm sure you'll have a great time and practice does mate perfect!

@Dj Batman - Helms Deep has always been a long time project of mine, one day! And yes, little man's hair does rock, I'm envious!

@Clt40k - Thanks mate, I hope to have a few more hobby years with him yet, well before he gets all jaded that is.

Fantastic stuff, Corbane: if Baby Drax doesn't develop a taste for this sort of fun in the years to come I'll have to send her down the mines. Things like this really will make for lovely memories for your guys!

By the way, why does it have that particular footprint? Is it designed to fit into a certain space?

You and the little man did a great job, its a shame you could not paint it though!

A few more projects like that one and you can start putting little man to work in the Terrain Mines. :)

Great work, man! I remember building and painting models with my dad (ages ago) and they are very fond memories!

Oops, soz I missed these guys.

@Drax - Cheers mate, it's designed to fit on one of those half hexagon school tables, they have three of them that makes the small world corner.

@JTaylor - Thanks mate, yeah, we were a bit gutted we didn't get to finish it too.

@Cawshis Clay - That's the plan matey ;-) I hope it's one of a few fond memories he has, especially when he gets to the Kevin stage.