I headed down to gatekeepers, my local gaming club to see how my guys would handle the new codex whilst playing the club pro, so to speak. Dave, my oponent is a exGW staffer and regularly wins everything at the club. In the few games we've had, I've never beaten him. 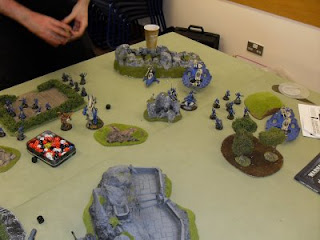 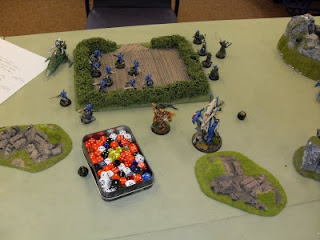 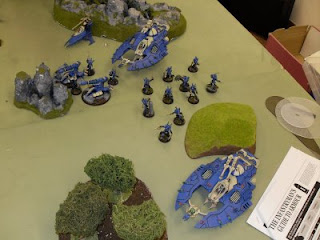 He tried to sweep his wave serpent full of fire dragons around my right flank, which was held by a russ and a devildog. One melta cannon shot later, out piled the fire dragons as their transport went down in smoke, all nicely grouped together for the battle cannon, one big blast and nine heavy bolter shots later, a single fire dragon went running for the hills whilst mumbles of broken codex's could be heard across the table.

On the center and left flanks, my forces traded fire with the Eldar but the concern of wraithlord and avatar combo coming straight at me was getting a little concerning. 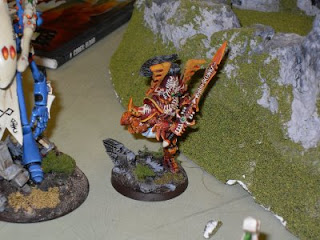 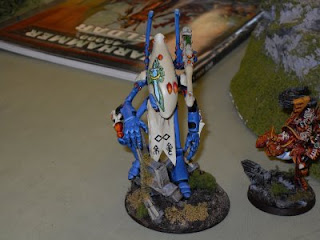 So, I sent in the center mech vet squad, I knew they were going to die but I just needed to hold them up. 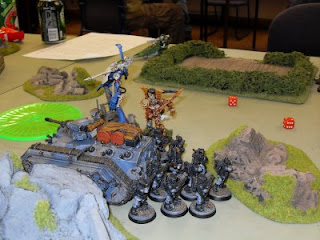 It paid off, over the next two rounds, the center and left russ hammered them with unrelenting fire power. With the major threat in the center dealt with, my center and left flanks started dealing with the guardians and vypers whilst on my right, I faced a new deadly threat. 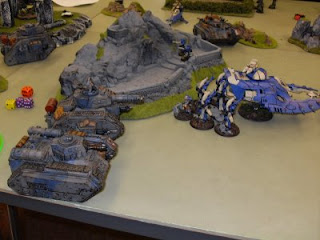 The second wave serpent approached my lines, destroying the devildog and then dropping off a large unit of wraithguard. The russ didn't even have time to shoot before their warp weapons made short work of it. 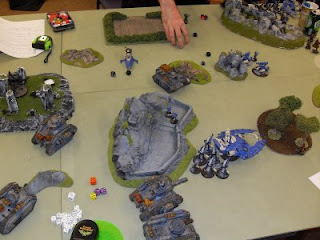 Before they had time to sweep my flank, I redeployed my center russ to bring death to the entire unit. At this point, it was clear that I had won the field, 9 kill points to 6, VICTORY!!!! Overall, a really good game.

After each game, I take a little time to chew over what I did wrong, check into the rule issues or enemy units that came up and also figure out what I did right. After this battle, my main thoughts are :-

1. I didn't get chance to try the new orders, so I'm going to have to save that for another game.
2. Master of Ord. won't hit the unit you aim the blast at, the scatter is just too high, unless the enemy is tightly packed, it's not going to do much.
3. Eldar snipers are deadly to sentinels, I need to read into their rules, sniper rules and rending rules.
4. Although the devildog didn't do much, it's potential is great, especially considering it's a FAST vehicle, so could easily contest an objective with it.
5. Under the new rules, the russ with heavy bolters on the hull and sponsors throws out a horrendus amount of firepower. Sponsors rule again.

Great battle report mate and congrats on a solid win!

''So, I sent in the center mech vet squad, I knew they were going to die but I just needed to hold them up''

It's why I love the guard so much - in what other army can you just casually throw away entire units like that?! Awesome!

Well you can do it with Orks too, and typically get a good laugh at doing so!

Great report! Thanks for posting. I especially appreciate the post game wrap up!

I need to go back and reread the IG book. I didn't realize devildogs were Fast!