Things have been progressing well on the hobby front. I've been listening to quite a bit of 40k radio recently whilst painting, for a bunch of yanks, it's not that bad. I'm quickly exhausting the previous shows, so I might have to sign up.

They're coming along nicely. I'm currently working on two squads of ten, and then the same again to round up the platoon. I don't think I'm going to add anymore heavy weapons teams as I've already got three and there's other projects I want to spend my time on.

Well it's grey with blue grey stripes, and now it's the daunting battle damage brown stage, which, if you've seen my other vehicles, is going to be a mammoth job. I think this one is going to be a long term project. I'm not going to be using it much and there's plenty of other stuff that I do want to get using. 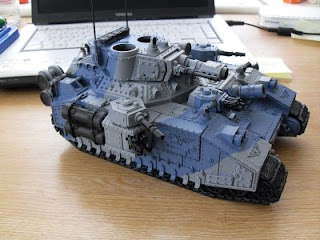 I'm heading down to WW in the next couple of weeks. I'm planning to pickup a few new guard goodies but while I'm there, I thought I get some pics of the models in the mini hall. I know quite a few of you lot are Yanks or Johny Foreigners in general, so, if you'd like any pics taken of any particular forces, then let me know. I'll do my best to get what I can.

I'm playing a good player tonight at the club with the new guard list. I've kept it as close as possible to my previous mech force. The storm troopers are now Vets in caraprace armour. The sentinels now have camo and one of the russes has Pasky commanding. I've also included Bastinion as one of the vet sgts and taken a Master of Ord. I've only got one officer and Basty who can issue orders, so I'm hoping it'll be an easy break into the orders system.
Posted by Col. Corbane at 07:39

Good luck with your game, hope you have fun!

Hopefully you'll have seen my pics from WW, its really difficult to get decent shots as the shelving is all glass and there are mirrors behind the models so its difficult to get any kind of focus (so what im saying is good luck i hope you've got a better camera than I did on the day!!!)
Craig @ cadian8th

If warhammer world has any Death Korps of Krieg on display, please snap a few pictures for me. I'm an American myself, but I've always wanted to see the different and apparently quite amazing places in the UK that focus on the hobby.