Not a full post this time, I'm posted out after the Valkyrie tutorial - lol

Things are slowly progressing on the 40k front, with various projects getting bits of my limited time this week.

I've never really liked the idea of commissars, my boys are professional soldiers and don't need some sort of pistol toting political officer keeping them in line. The late one night whilst looking over a few bits, I had a thought. I'm planning a special operations squadron for my storm troopers, so it would be ok fluff wise to include special ops liaisons with my squads as stand in commissars. They're relatively good fighters, I can see them making the squad stubborn and yes, I can see them slotting the squad sergeant if he loses his bottle.

So, here we have the first of my special operations liaison officers. He's almost finished, but I was that pleased with his skin (my first proper attempt) and his beret, I had to post a pic. 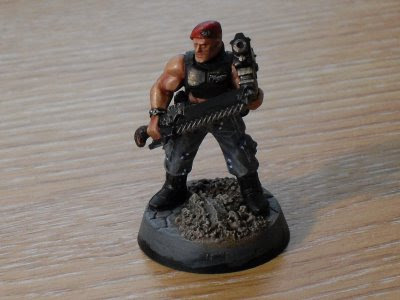 After a comment from Alliance, I've updated my magnetising the Valkyrie post to include how to magnetise the wings for easy transport. I've finished putting the major bits together and now it's ready for priming. I recently picked up the FW masterclass book and it's opened my eyes to a whole new level of painting, I'm planning to really up my game with the painting of the Valk. I figure that I can get away with going further with the flyers as if I do a tank, I know I'm going to want to update all my tanks and that's just too much work.

Anyway, my Valkyrie ready for priming. 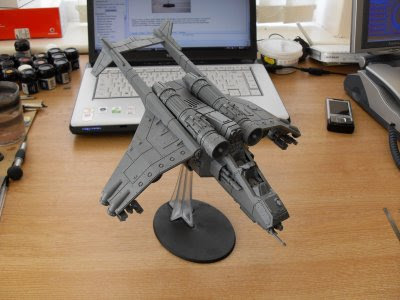 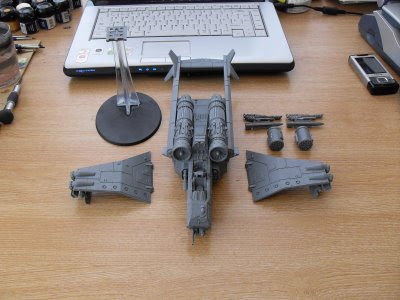 Thought it was about time to update my painting points. Now, remember that I work mine differently to Lone Pilgrims in that mine is a count of models waiting to be painted, the idea being that this number goes down over time. So, how have I been doing, well, since starting the count I've completed :-

So, a total of 41 points from the original troop total of 274 gives me 233, so looking good. Well, that is until you look at my purchases and also gifts (I've had a birthday this month) I've received this month.

So, a total of 10 points worth of troops, taking the troop total back up to 243. I've also got 40 points worth of vehicle points bringing the total to 170. Overall, that takes my total to 413, a 9 point increase on my starting amount.

So, not the best start to my paint points project but considering we've had a new codex with new releases and a birthday in the same month, 9 points isn't so bad. Hopefully, over the next few months, I'll get the total down ready for xmas - lol
Posted by Col. Corbane at 14:36

Although I'm shocked to hear you dont like the blessed Commissariat (please report to your nearest Company HQ for...re-education), you've made a really good looking model there.

He really looks like a mean SoB, that I certainly wouldnt cross!

I'm looking forward to seeing more from the Valkyrie :)

i think fluff wise you've hit th nail on the head with that liason officer. He looks really good and thank god for people that pinvice bolter ends!!!

Did you know you can create short links with AdFly and make money for every visitor to your shortened links.