I went in for a command squad, and came out with a Valkyrie! 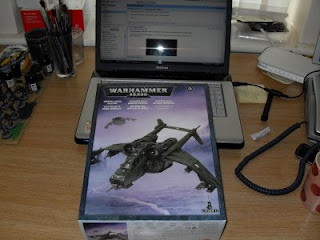 Whilst out shopping with my nearest and dearest yesterday, we called in at the local GW. I've been wanting to pickup the new plastic command squad for a few conversions since they came out, plus I needed some more shadow grey for my hellhammer.

After checking the shelves, I ended up asking one of the staffers where all the new guard stuff was. The reply was simple, everything but the valkyries had sold out. Bugger, so that left me with a tub of shadow grey and some round bases, all hopes for shiny new goodness dashed. It was at this point that my wife showed one of the reasons I love her so .....

"You're never going to just get a paint are you? go on, get something if you want it"

A cheer went up from the staffers and a couple of vets who were hovering around the painting station. I reached for the valkyrie box pushing aside the little voice in my head that kept saying "you don't need it" and "you can get it cheaper online". It's like plastic crack.

So, I'm now a proud owner of a valkyrie. In truth, the model scares me, there's so much potential in the kit and knowing me, that's a lot of potential cock ups. So I'm sending out a plea, if anyone has any tips on putting this thing together or painting it, then send them in. That goes for links to forum posts, blogs articles, anything you think will help.

Here's a couple of pics of my mates FW valkyrie, just so you can see what I'm up against. 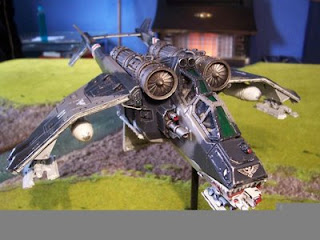 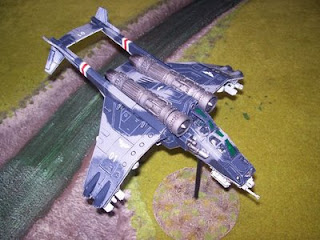 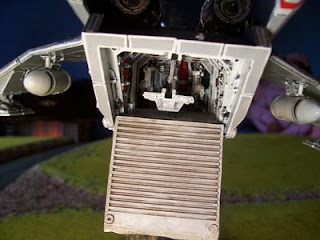 First, trim everything carefully. The kit fits together tight but requires that butt-joints are carefully cleaned to look good (particularly the two halves of the top of each engine.

Second, if you're going to paint the interior, do so before assembling (unless of course you'e use to doing ships in a bottle) This includes the cockpit.

Third, remember the phrase, "Dry-fitting is your friend" -- make sure you know how/where a part will fit before applying glue.

One specific thing I noted: the instructions show assembling the heavy bolter support so that the short pin is on top. You may want to play with that if you're using the door gunners.

Good luck, matey - I plan to enjoy it vicariously through your tribulations!

paint the interior first and asemmble the troop compartment from the bottom up and if you can dont glue the roof on if you want to show off your interior details. I also recommend using a testors spray coat for your base before you air brush. Also paint the mounting plate for the clear spire last, to thick a coat in the groves and the piece will not fit, also the cockpit glass will smuge at the lightest touch so use tweezers and minimal glue.