RSM and Sandy the dog

Things are really heating up on the hobby front although I hit a stumbling block once I completed my second hydra. The thing is, all of my next guard projects are all quite involved and with me only recently getting my 40k mojo back, they're all a bit overwhelming to be honest.

After a little thinking, I realised that the Corbanian 1st doesn't have a regimental sergeant major or a regimental mascot. So, I present to you, the RSM and Sandy the dog .... 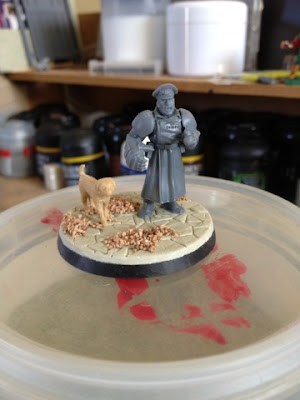 Obviously the RSM is sporting his beloved pace stick and a rather nice powerfist, both from the Cadian command squad sprues, his body is actually the Baneblade commander but it works well for an RSM. Sandy is a great little model from a Tamiya accessories sprue. I should give due credit to Admiral Drax for the mascot idea, it's been rattling around my brain since he first posted 'after the war', his corgi regimental mascot. So, time to paint this terror from my nightmares up, I'm hoping to do a proper face on him, fingers crossed, I'll be able to pull it off.

On the gaming front, things are certainly heating up. My good mate Mike has created a new blog for his new Tau force. Mike's had a few Tau armies over the years I've known him, so no doubt it'll have some stunning models on it before long. The other reason for creating the blog is a new narrative campaign we're planning on running between his growing Tau force and the Corbanian 1st. More on that coming soon guys.

Finally, I'm getting really stuck into my The Terrain Tutor project. So far, I've filmed a few tutorials but I've got a lot of editing to do. I also really need a decent video camera, so I've decided to sell of some of my old armies on ebay. So far, I've listed my Dwarf and Undead armies from the 1980's, I'll be listing my High Elf army soon, followed by my Nids and Space Marines later this week. Hopefully, that'll generate enough cash to get a decent video camera and some more Ork models for little man.

If you're interested in any of those forces, check my Ebay listings.

I agree, he does have a sort of RSM air about him. Nice use of the Tamyia dog.

I'm gonna put all of mine on one base and have my own little ripper swarm.

Our old CO used to have a golden retriever called Daisy who could always be relied upon to provide a 30 second 'early warning' of the Colonel's impending arrival on exercise.

And cheers for the nod: sadly our canne muse is no longer with us.

@zzzz - Like it mate, I can hear the screams, unleash the dogs of war!

Cheers mate, one of my old RSM's had a black lab that used to announce the arrival of the RSM. It was once jailed for running across the parade ground!

Gutted about your loss mate :o(