With my invigorated passion for 40K, there comes new models!

My buddy Mike recently bought me a squad of ten guardsmen models for my army. He said they were a gift but there's a little bit of me that thinks he's emotionally blackmailing me to keep my hobby mojo going. Well, if that's the case, it's bloody working! I love these guys! 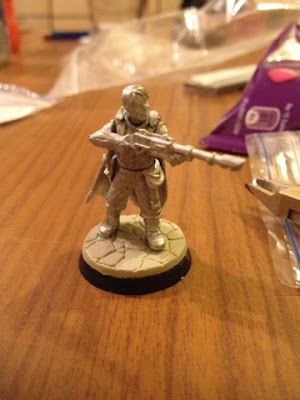 It's a squad of ten Border World Rangers from Victoria Lamb miniatures. The models are brilliant but they're posing a real challenge for me. It's the first time I've working with multipart metal models, so there's been lots of gluing arms and heads to fingers rather than torso's etc! Now, I'd like to make it clear that this is a fault with my modeling ability and not the models, which are truly excellent.

I really can't fault the detail on these guys, the molds themselves are so clean, I didn't realise they had mold lines until I'd primed the first five. They're perfectly scaled with GW plastic cadians, they're the same height, just a little slimmer, but that's perfectly acceptable as they've got bare arms and aren't sporting flak armour. Each ten man ranger pack comes with 10 legs, torsos, heads (all unique), cloaks, one piece arms and lasgun type weapons along with a good selection of pouches and bayonet scabbards. 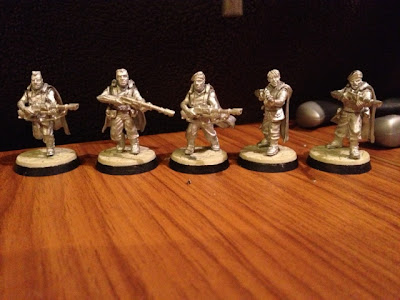 The one thing that I am finding difficult is that the standard ten man ranger pack only comes with lasgun type weapon arms. Victoria Lamb miniatures do various other special/heavy/sgt arms for the ranger models that are quite good and could easily be called various IG weapons, it's just that I don't have any of them. I will in the future but right now, this has led me down the path of converting them. Here's my first go at swapping out  the metal weapon for a grenade launcher, let me know your thoughts guys! 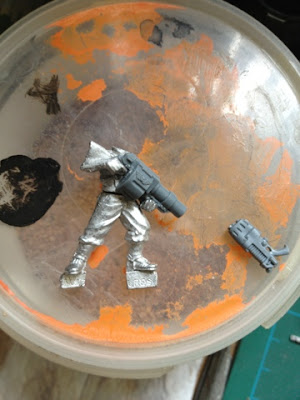 All I've got to do now is two more special weapons guys and the squad sgt, so the bits hunt begins! Hopefully, I'll them them converted up pretty soon, I'll blog them when I do and then it'll be time to get them painted and added to 1st platoon. In the meantime, you can checkout the ranger and other future world ranges at Victoria Lamb miniatures, and if you buy any, let her know I sent you, who knows, she might send me some bits for free (cheeky yes but there's no harm in trying guys!).

Nice! I recently worked up my first batch of VL minis and was blown away, will definitely be ordering from them again.

I really dig how those border world rangers look, and the grenade launcher swap out is ace! Looking forward to seeing more of these - keep up the great work!

How timely - I just received a batch of these rangers *cough* Gaunt's ghosts *cough* yesterday and just got to wash them clear. Good to see some inspiration on the poses and mixing with plastic components. Are you considering using some greenstuff to better tie the cloaks?

@Mordian7th - tell me about it mate, her ranges are excellent and free shipping to the UK is a double bonus. Hopefully I'll have the others converted for the weekend.

@Albert - glad to provide inspiration mate, for the poses, I went with low belly slung guns for the running guys and raised guns for the guys in stance, hope that helps. I'm definitely going to work on where the cloaks join the torsos. To be honest, I kinda rushed these five to get them together, there's a few little areas I need to touch up mate.

Sweet...and I love the grenade launcher conversion too!

@AD - Cheers mate, I'm chuffed with how he worked out as well.