I have a confession to make, I put the first five Victoria Lamb Rangers together way too quickly. I suppose it was because they were a present and I was excited to put together my first multipart metal models. I put them together and primed them that quickly that I really dropped the ball with them. I didn't think about the unit composition, I didn't clean up the mold lines, I didn't fill any of the gaps with green stuff. Hell, I even forgot to put gravel on their bases! 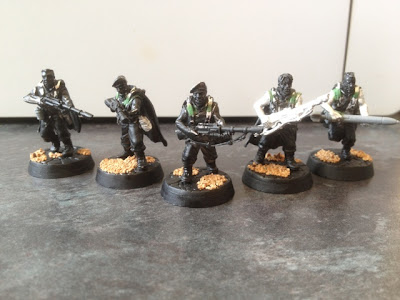 So, once my over eagerness had had a serious kick in the arse, I sat down and reworked them. First off, I filled in the gaps and blended the capes into the straps on the torsos as well as cleaning up what slight mold lines there were and added gravel to their bases.

Next came a composite change, first off I swapped the arms on one trooper for a different set. I needed the ones he originally had for a special weapon conversions. The other change was that I swapped out another troopers rifle for a rocket so he could act as the support guy for the squad's heavy weapon. It took a fair bit of clipping and filing to completely remove the lasgun type weapon, so much so that I had to resculpt the thumb on his right hand.

Another minor change across the five guys I did initially was that I broke off their waist pouches, canteens and scabbards, then replaced them with GW IG pouchs and grenades. The reason for this was that after I completed the first five, I realised that other than the bases, there was nothing really that tied them into my current guard models. So, with the next five I decided to make sure there were plenty of visual links to my current guard models. 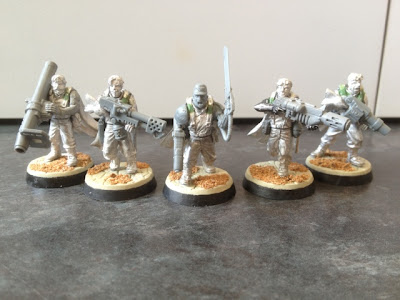 Being veterans, there's plenty of unit options to include upgrades and therefore tie them into my current guard force. For the three special weapons guys, I went for a flamer, a meltagun and a grenade launcher. Ideally, I'd have gone for three plasma guns as Mike hates plasma but unfortunately, my weapon selection was down to what bits I had and not what bits I desired!

All three specials involved removing the lasgun type weapon, so lots of clipping and filling. I couldn't remove the weapon stocks, so I had to line up the arms and weapons to look like the special weapons came with shoulder stocks. Even though the GW IG weapons look a little large, I don't think it's excessive.

Next was the rocket launcher guy, I used catachen plastic arms for this guy. The muscles on them were far too large, so I filled them down. They're still quite big but with the addition of the rough bearded face, it gives the impression that he's probably the only guy in the squad who could carry the damn rocket launcher.

Finally, the squad sgt, this guy I really wanted to tie into the 41st millennium. So I went for the augmented power sword arm and plasma pistol arm for the high tech look. I did consider removing the shoulder pads but I decided that they actually helped tie the unit in with the rest of my force. Finally, I used a GW command head, specifically for the aquila on the cap.

So here they are, all ready for priming ..... again. Let me know your thoughts in the comments guys. 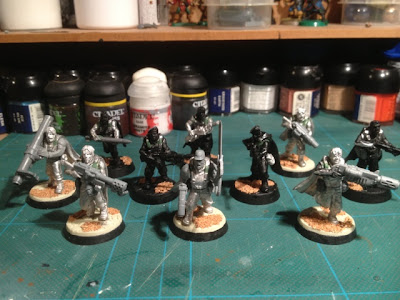 I love the guy running up with the missile. (not like that, I just think it's a well posed and constructed model)

And I agree with your comment about weapon scale. Your squad is reminiscent of the illustrations of the Ghosts with their over size "small arms."