Well, with all the rumours going around about the new platoon structure, I thought it would be a good idea to put a full platoon together. So, based on the proposed layout from Bols, thats 1 command squad (5), 2 special squads (12), 5 heavy weapon squads (30) and 5 squads (50), giving a grand total of 97, just 3 off a 100. That's quite impressive, almost 100 men for one troop choice.

So, starting at the top, here's the HQ and the first two heavy weapon squads. 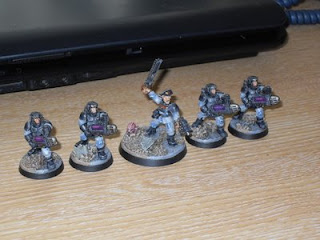 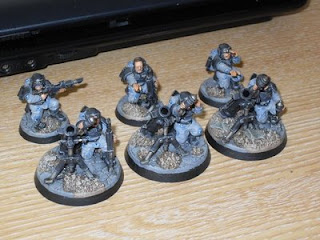 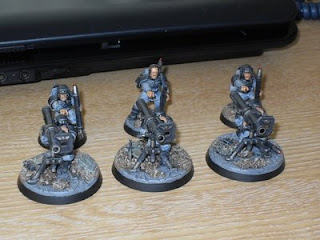 I'm going to get stuck into the special squads and another heavy weapons squad next. I'm not going to give them any unit markings until I actually get my hands on the codex.
Posted by Col. Corbane at 06:02

I like the purple plasma coils - you don't see that very often.

I look forward to giving them there first taste of defeat. :-D

Cool, and I love your models.

From the sketchy rumours so far I've been playing with a number of ideas in an attempt to keep my lot infantry only. It's hard, but very very very interesting. I love paperchasing challenges like this.

One thing though - I've always liked a fairly high officer/men ratio, and that seems potentially vital in the new version (more officers = more special orders) so I'm struggling to organise my boys so I've still a good amount of Rupoerts around: might not your uber platoon suffer?

Are those Shadow company guys or your own build. Very nice looking!

-come over to www.the25mmwarrior.blogspot.com and vote for what you want me to do next!-

@25mm - sorry mate, not sure what you mean. They're just normal cadians that I painted up with a scheme I saw in White Dwarf.

Very nice models sir! Although once the codex is out you'll need to rebase your heavy weapon teams on one big base. Annoying I know! But Heavy 20 Galting cannons make it a bit more bearable! ;)

I won't be bothering Kron, I only play with friends and at the club so everyone will be cool about it.