Well, while I've been waiting for my bits to turn up so I can continue my trenches, I've decided to catch up on my guard. I was planning to paint up my hellhammer but to be honest, I'm sick and tired of painting armour after finishing my armoured company.

So, it's back to troops or more specifically, another HQ unit. So far I've painted up the command squad and two heavy weapon support squads. I still need to do their bases and a bit of touching up, but I'm almost there. 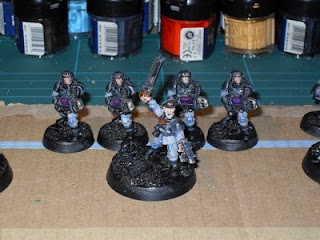 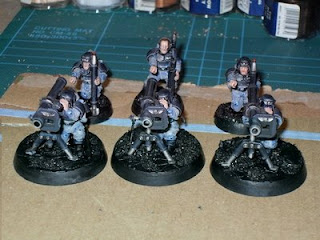 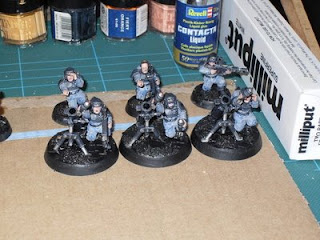 Slightly off topic, I captured the footage so far for my trench tutorial this evening. Now, I might not be the best film maker or the best narrator in the world but the footage ain't that bad. I've managed to get 13 minutes of useful footage on planning and then making the bases, so things are looking good so far.
Posted by Col. Corbane at 15:07

Nice work dude, as I said the other week while watching you play the Salamanders (can't remember the players name.) I like the purple style plasma guns instead of the usual blue/green ones everyone uses.

Although I will say in the first picture the guy at the front looks as if he's lost his boat and parrot. lol.

Will be looking forward to the game on Friday, that is if we're still on.. (points to the forum). :-p

I like your color scheme here, not the usual Guard colors you see all the time.

Hey dude, just saw your comments on the cadian 127th so i thought id check out your blog. You've got a great colour scheme going on. Check out my stuff at cadian8th.blogspot.com and follow if you like, I'll be following your interesting work from now on!
Craig @ cadian8th (the standard bearer)