Well, another day, another rumour about the up coming Guard codex. To be honest, I've getting a bit tired of it all, so I've made a decision. I'm not going to bother with reading to much into them.

At the end of the day, we're not going to know for sure until it's released and there's nothing you can do about it once it's been released. So I'm just going to wait until it is released and take it from there. I've been in this hobby for nearly 20 years, I don't mind waiting for the codex.

On a final note, I did come across this, the suggested new guard codex cover ..... 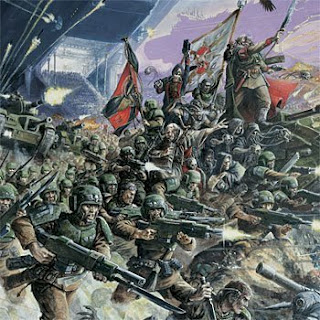 Image from Warseer
Posted by Col. Corbane at 05:19