As some of you will remember, a short while ago, I identified a horrific syndrome that afflicted many veteran games in my blog 'Do you know the rules?'.

Multiple Edition Syndrome (MES) is a condition where you've played that many different editions, that the rules from the various editions have melded into one ruleset, often leading to critical errors on the battlefield. On that post, there was a comment from Dverning from Maunderings of a 40k Gamer. This is what he said .....

"When a new rulebook or codex releases, I sit down and read the entire rules section and take notes. It's easy to gloss over or forget changes when you're just reading. Taking notes at the same time forces that extra bit of comprehension. This also makes a handy "cheat sheet" when you head to the table for practice games."

Well, I took his excellent advice on board, and got myself an A4 notebook and started learning the rules from scratch, and I think it's most definitely a cure for MES. I've approached the rules with the mindset of a complete newbie, I even wrote notes on how the turns worked!

It may seem a bit silly for a veteran gamer with two decades of 40k under his belt to make notes on principles that are so basic and haven't changed in five editions but I didn't want to say I know that and then skip it, as I get further into the rules, this could lead to some serious oversights.

Instead, I've started from scratch and I'm going to learn the lot, there's only 96 pages and at a page a night, I should have it done in about three months. Once I've got the rules down, it'll be time to hit the codexes, no more having the wool pulled over my eyes by those doggy xenos and glory boy players again! 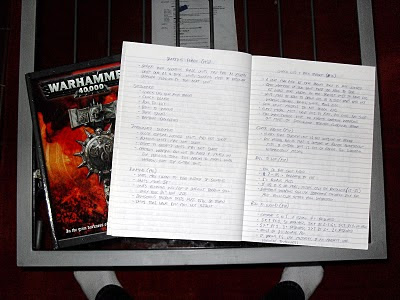 Finally, I'd like to share with you another reason why I love my wife so much. Obviously Valentines has just gone by and I treated her well, but she admitted that my present hadn't arrive yet. Instead it arrived yesterday ...... 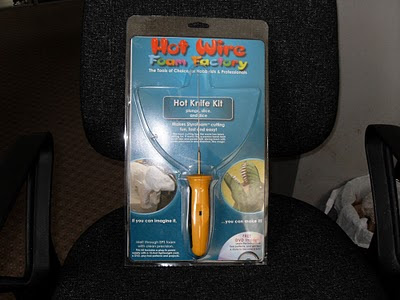 I really love that woman! Shame it didn't arrive earlier, as it would have made my latest project for little mans school a hell of a lot easier ...... 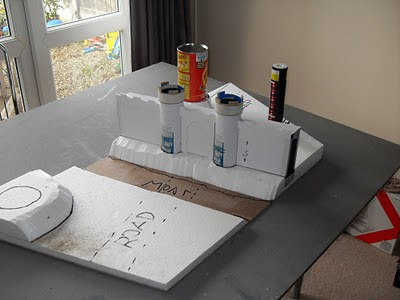 There's still quite a bit to do on it before he returns to school on Monday, but I'm hopefully me and him will get it done in time - fingers crossed! You can follow the castles progress on my Google Buzz.

For all you guys who follow my blog for the models, I've got one more colour to put on 9 guys and 2nd Platoon will be finally finished, piccies coming soon.
Posted by Col. Corbane at 09:50

Bah, that cure sounds like work! I need a good ol' fashioned snake-oil that'll fix me after just one quick dose. Got any of those up your sleeve?

MES is a drag sometimes. Luckily, I'm not too affected by it - I started playing in 3rd Edition. The two Editions since then have basically built upon that system instead of tearing it down and rebuilding it, as the transitions from 2nd to 3rd and (reportedly) 1st to 2nd were. Most of the changes have either been improvements, such as the close combat rules or new stuff you can do (running, go to ground, etc...) and therefore quite noticeable...

One of my friends does keep quoting 4th Ed rules at me though - the first time I reserved everything at the start of a game, he came out with the "No one on the table = Loss" rule...


I think that's a really good idea, probaby help when learning a new system too.

Hot knives/wirecutters make scenery building so much easier it's ridiculous.

The buzz word for that method is "active reading". A revision technique I've had shoved down my throat for the last 2.5 years haha. Hadn't occured to me to put it to a more enjoyable use, great idea!

Your sons project has additional benefits, not only do you get to spend time with him but it seems you'll get a great piece of scenery out of it ;)

"Active Reading"? Well, good to know the term. It's a technique I started doing after 3rd came out. There were so many core changes that I found myself tripping over MES all the time.

@Corbane: It's hard not to gloss over the parts you think you know... but a change there is usually quite interesting. They're subtle core rules shifts like the amount of dice vehicles use when moving through terrain or how far a unit falling back moves. Cheers and thanks for the link.

Only playing other people who don't know any of the rules either makes for a slow but essentially fair game.

And I've found that I've learned best from mistakes, like applying the AP vs Save rule and morale checks for sides loosing a punch up. No going to forget those ones again, even if all the other rules escape me.

@W39 - I've found that success takes work mate, whether it's running a business, playing a game or even blogging about a game! On the quick fix, you could try kidnapping one of the design studio staff and keeping them in a rucksack, then you'd have a reference source on hand! - lol

@Gothhammer - We the lack of painting recently, I've begun to doubt it myself mate. I've been using a wire cutter for years, but I'm really loving this hot knife, I'm starting to wonder how I managed before I got it.

@Soundwave - An educational technique that's useful, next we'll have someone telling us that you can us maths in 40k too! On the castle, oh yes, I can see a battle or two before the school kids get their hands on it. Don't think the teacher would be too impressed with me mounting a defence laser on top on the donjon though - lol.

@Dverning - Thanks for the tip matey, it's really improving my game.

@Drax - Well, it was a valentines present after all ;-)

@ZZZZZZ - Problem is mate that most of the people I play are bigger suffers than me. Although when I plat Draz, he's always pointing out rules errors to me, God Damn newbies! lol

Heh, we all dream of having a knowledgeable GW monkey tied up in the cupboard, on hand to quote the rulebook by rote so we don't have to go searching ourselves... :D