It's taken a while, but I've finally got all the the HQ section of 571 Infantry company together for a muster pic. So, here you go ..... 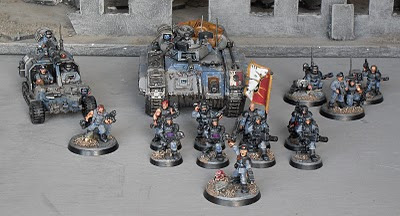 That's all of them complete, so there will be no more added to them in the future. The command section consists of the standard commander with a selection of vets depending on the game situation. The squads got two plasma gunners, two melta gunners, the commissar, voxcaster, the company standard bearer and the squad medic.

There's also Marbo attached to the section as he doesn't take orders from anyone but the boss, in truth, he only takes requests from the boss but he gets the job done and so the Colonel doesn't mind. Also attached are the company advisers that I kitbashed up, along with the escort sentinel halftrack and the HQ sections chimera ride.

For more pics of the attached units, take a look at these posts ....

So, that's it for the command section of 571 Infantry company, 2nd platoon coming real soon.
Posted by Col. Corbane at 10:53

Very Cool! I like the vehicles especially. I presume that the guy with the beret is the Commissar?

I've never used Marbo, preferring instead Colonel 'Extra Hands' Straken who will be leading my Renegades into battle this evening. I may have to give him a try sometime.

Very cool. I'm looking forward to when I can start my IG army.

great job Col. the HQ section looks great and the army theme connects well with all the units/tanks. Looking forward to seeing the platoon!

what an awesome shot!

Nice to see a group shot! The painting is done very well.

The battle damage on the 'tanks' are cool, nice. I also like the lenses, from the sentinel and the advisers. And I must say.. the little map is really, really cool!

With regards to the unit identification on the Chimera's front trackguard, is that a decal or did you paint it? (Or a combination?)

Man, I love what you've done with your Guard. Maybe one day I'll see them in the flesh...

I think I'll go for a group shot for post #200. I wonder if I can paint up my mortars and my remaining special weapon squad within the next nine posts?

Good work! My Guardsmen are jealous of the attention yours get with painting :P They keep telling me "Please no! No more drybrushing! Arrrggghhh!"

I'm a little jealous of your ability to finish things.

That is seriously impressive. Love the group shot.

Nice job all around, especially that little half-track. Very cool.

@Da Masta Cheef - Yeah mate, the para is my commissar. I can definitely see a para slotting a sgt if he bottled it. I think Marbo is a must mate, the guys down at the club hate him!

@D'nyarak - Cheers mate, I'll be posting the platoon up on Friday mate.

@Dannis - Cheers mate, glad you like all my little bits.

@Frag Dad - The white and red is painted mate, everything in black is a decal from the tank transfer sheet.

@Admiral Drax - I'm sure one day we'll be able to get together mate, hopefully on the same side to crush some xenos scum - lol. Go for it on the group shot, I'm sure you can pull it off.

@Soundwave - Just beat them with a large drybrush mate. After a good beating, they'll fall in line and stop complaining ;-)

@ZZZZZ - Must admit, I'm pretty strict with myself on projects. I normally only allow myself to have one infantry, one vehicle and one 'hobby' project on the go at one time. I'll only start a project when I've finished the last one of that type.