Well, if the smurf loving players at the club didn't like my Marbo, then they're going to hate this! 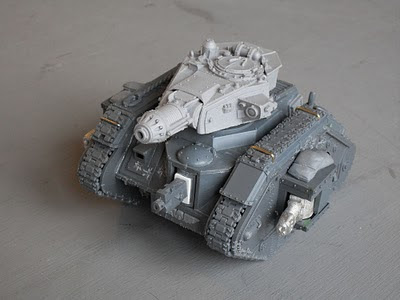 This nasty beasty will knock out 5 plasma blast templates per shooting phase and will have those glory boys who strut about in power armour diving for cover at the mere mention of it - hehehe!

The turret itself is the old style Forge World one, I'm not really much for the new plastic one, it's a bit too phallic for my liking. When the turret originally arrived way back in May last year (yes, I do tend to sit on things for a while) it had obviously had a bit of a casting accident and the two halves had slipped. Forge World did replace it without question (Go FW!) but I wondered after a while if I could rescue it. 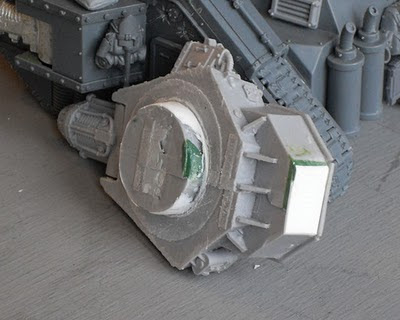 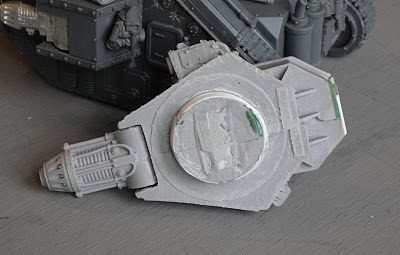 Personally, I think I've managed to pull it off, but I had to rebuild the mounting rim and the back ammo storage lockers. I had to use a bit of plasticard for the back panel as the slip was really obvious there and I need a smooth back panel for the tank's identity flash. I'll get primed over the weekend, and I should hopefully have it finished in a couple of weeks, pics coming soon guys.
Posted by Col. Corbane at 10:07

Plasticard for the win!
It never ceases to amaze me the quality issues Forgeworld allows. Good thing they have a great replacement policy.

Personally i think that one is more phallic looking that the plastic none. I have a Ryza pattern Executioner which a bit more mechanical.

You are, I will require 3 squads of 2 Obliterators to equal that sort of fire power, and at a points costing of 450 pts.

Looks pretty sweet though, I think I remember you mentioning this beast last time I was at the club.

Looking forward to seeing it painted. You're just going for cheesy arsed annoy the living crap out of the smurfs list are you? :-p Good man.

As they replaced it, does that mean that you are going to field two of these ? Or just going to have Pask as the tank commander ?

What are you using to hold the spare links on with ? Time to raid the railway modelling shop for brass strips, before I start tarting my armour up.

@Kevin - It amazes me sometimes but they've never argued once, just replaced it real fast. Make you wonder if they just sod the quality control and just replace anything without question as the slip on this was pretty horrendous!

@Draz - Considering what I did to your blood angels without it, can you imagine what I'll be able to do with it! It's spider pigs orks I'm really after. I've never beaten him but he hasn't played me since I caught him cheating - 20 strong nob unit my arse!

@ZZZZ - I'm saving the other turret for another conversion, probably the company command tank later in the year. On the links, they're metal paperclips mate, avoid the coloured plastic coated ones and get bare metal. I have a couple of different sizes for different jobs. I used paperclips for doc butchers op table and drip stand ...

Nice work with the plastic card and green stuff. The Executioner looks great, cannot wait to see it painted.

I personal feel that I have betrayed Father Nurgle by not having an Executioner tank or two in my Nurgle Renegade IG army. In fact I have zero plasma in the entire army.

Looks great... It is nice that FW has such a good replacement policy... I can't tell the difference on top and the plastic card won't be noticiable.