RSM and Sandy the Regimental Mascot 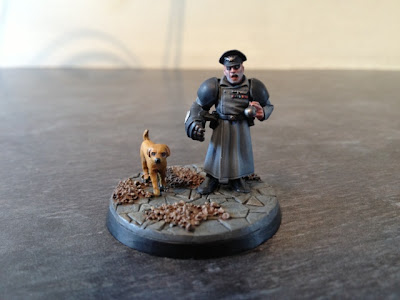 A little late posting this but I've finished my Regimental Sergeant Major and his dog Sandy, the regimental mascot. I'm really pleased with how he's come out, his face was the second proper face that I've tried to do and it's come out reasonably good. Sandy was a real challenge as I'd never painted a dog before but overall I think I managed to pull it off. 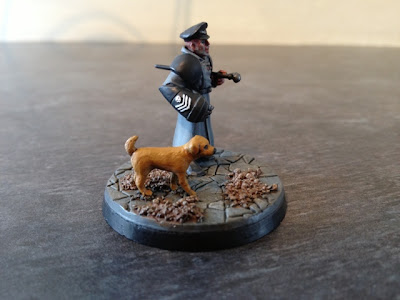 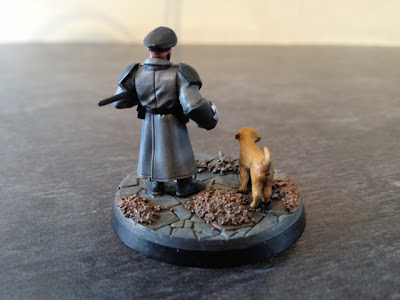 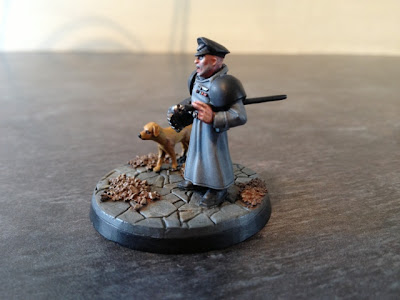 In other news, Corben's Orks are slowly coming on, we'll be posting them soon. He's also starting to learn the basic rules and as most kids his age, he's just soaking them up far better than expected. I also had my first proper game of 6th against Mike's new Tau force and I have to say, I'm loving the feel of the new rules, more on that coming soon.

Anyway, what do you reckon to the RSM and his pooch guys?

Very nice. Almost disappointed that Sandy isn't piebald or skewbald, but that would require an RSM with a sense of humor !

I really like it, you've captured the natural colour for the dog very well if I may say so. And the base is also a winner. That's gone into my 40K picture file for reference as the epitome of senior Guard NCOs!

And during times of poor supply, the pooch can serve as a quick kebab too!

A fantastic piece and an excellent face (and the dog's not bad at all either)!

I love the pose; very much "MARCHING HUP AND DAHN THE SQUAYAR!" which is just right.

@Zzzzzz - Cheers mate. An RSM with a sense of humour? Never happen, they have it surgically removed when the receive their warrant! lol

@Col. Scipio - Thanks mate, I have to say, I found the dog more challenging than the RSM!

@Dai - Thanks mate, even though that's sacrilege, I'm sure it's been considered ;o)

@Admiral Drax - Cheers mate, I daren't put him in my cabinet incase he starts jailing the rest of my troops for being dusty on duty!

@The worker - Thanks mate, must admit, I love the pose as well and it just came together so easily, it was meant to be!